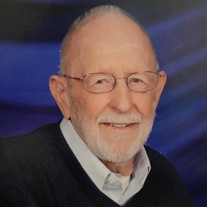 Robert LeRoy Stuart, son of Cecil and Mary Winona (von Lackum) Stuart, was born on December 17, 1930 in Walnut, Iowa. He was baptized on January 1, 1931 at St. Patrick's Catholic Church in Walnut. He graduated from Walnut Public School with the class of 1948. After graduation Robert attended Creighton University where he majored in Biology. Bob graduated from college in 1952 and shortly after he enlisted in the United States Air Force; he went to cadet training in navigation. He was commissioned as 2nd Lieutenant in June of 1953 as a radar operator on B29 crew. He upgraded to B47 and B52's; finished his last year in the Air Force on B57's in Japan. Bob was released from active duty in May of 1956. Bob married Darlene Wood on August 8, 1959 in Traer, Iowa. To this union they had four children: Timothy Grant, Mary Elizabeth, James Robert and Jeffrey Thomas. He came home to farm with his father and after his father's retirement he went into partnership with his brother Leo. In 1973, Stuart Family Farm Corporation was formed with Robert and Darlene, Leo and Gayle and his mother Mary Winona. He was an active member in Walnut Amvet Post 45, Walnut American Legion Post No. 422; he was the Assistant Soil Commissioner, Director for the State of Iowa Corn Growers, involved in Knights of Columbus, St. Patrick's Church and was a Walnut Cub Scout Leader. Robert loved to travel. He and Darlene traveled to places such as Yellowstone, Nashville, Arizona, Germany, Switzerland, Austria, Hawaii, New Zealand, Scotland and several other beautiful places around the world. Robert passed away on Thursday, January 14, 2021 at Hillcrest Rehab and Retirement in Bellevue, Nebraska having attained the age of ninety years and twenty-eight days. He was preceded in death by his parents Cecil and Mary Winona; and sister Mary. Left to cherish his memory are his wife of sixty-one years Darlene Stuart of Council Bluffs, Iowa; children Timothy (Candace) Stuart of Denison, Iowa; Mary Beth (Dean) Kock of Hancock, Iowa; James (Deanne) Stuart of Ames, Iowa; Jeffrey (Susan) Stuart of Northbrook, Illinois; eight grandchildren; 4 great-grandchildren; brother Leo (Gayle) Stuart of Walnut, Iowa; nieces and nephews, other family and many friends. In lieu of flowers, please direct memorials to: Peace Haven Retirement Community- Walnut and St. Patrick's Catholic Church in Walnut.

Robert LeRoy Stuart, son of Cecil and Mary Winona (von Lackum) Stuart, was born on December 17, 1930 in Walnut, Iowa. He was baptized on January 1, 1931 at St. Patrick's Catholic Church in Walnut. He graduated from Walnut Public School with... View Obituary & Service Information

Send flowers to the Stuart family.