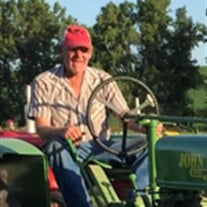 Bob Scheel, son of Walter and Henrietta (Ingwers) Scheel, was born October 27, 1939 near Corley, Iowa. He was baptized at Trinity Lutheran Church in Avoca, Iowa. He attended Harlan High School. Bob grew up on the family farm, helping his parents, along with several area farmers. On December 9, 1961, Bob was united in marriage to Donna Jean Obrecht at the United Methodist Church in Harlan, Iowa. This marriage was blessed with four children. Bob and Donna resided in Harlan, and then moved to Kirkman to start their farming career. They moved to a farm outside of Corley in 1964. Then in 1972 they made their final move to Southview Farm just outside of Jacksonville, and this has been their home ever since. They milked cows, raised beef cattle, horses, mules, miniature horses and Dalmatian dogs. They shared 58 years of marriage. Bob also worked off the farm at Peterson Brothers Elevator in Jacksonville for over 30 years, retiring in 2017. His passion was agriculture, and was proud to be a farmer. He was a member of the Corley Community Club, The Shelby County Saddle Club, and the Two Cylinder Tractor Club. Bob was also a lifelong member of the Bethlehem Lutheran Church of Jacksonville. Bob believed in living a simple life. He had three loves in his life; they were family, tractors and polka music. He enjoyed dancing at Corley Hall, teaching all of his daughters to polka behind the milk cows during chores. He also enjoyed a hot card game, a good cold beer and long tractor ride. Bob was a supportive husband and father cheering on his family no matter what they did. He loved watching his children show livestock throughout the years. And more recently, he really loved restoring old tractors especially John Deere's with his son and took great pride going on tractor rides. The highlights of his years were taking tractors into the Shelby County Fair Parade with his kids which he had done for the past several years. He would spend hours upon hours getting those tractors ready for the kids to drive. Bob had a special place in his heart for all his grandkids; he loved watching them play in sports, perform in plays, or showing livestock at the fairs. They were the twinkle in his eyes. Robert passed away on Thursday June 11, 2020 surrounded by his loving family at his farm, near Jacksonville, Iowa attaining the age of eighty years, seven months, and fifteen days. Blessed be his memory. He is survived by his wife, Donna Scheel of Harlan Iowa; children Brenda (David) Dau of Oakland, Iowa; Jeff (Beth) Scheel of Casey, Iowa; Becky (Scott) Scheel Lang of Buffalo Lake Minnesota; grandchildren Rachel Scheel of Ankeny, Iowa; Allison Scheel of Casey, Iowa; Austin, Shelby and Taylor Lang of Buffalo Lake, Minnesota; sister Carolyn (Tom) Morris of Council Bluffs, Iowa; brother-in-law Donald Nielsen of Avoca, Iowa; nieces and nephews; other family members and many, many friends. In addition to his parents Bob was preceded in death by his sisters Arlene Buck, Betty Holtz and Marilyn Nielsen.

Bob Scheel, son of Walter and Henrietta (Ingwers) Scheel, was born October 27, 1939 near Corley, Iowa. He was baptized at Trinity Lutheran Church in Avoca, Iowa. He attended Harlan High School. Bob grew up on the family farm, helping his... View Obituary & Service Information

The family of Robert "Bob" Scheel created this Life Tributes page to make it easy to share your memories.

Bob Scheel, son of Walter and Henrietta (Ingwers) Scheel, was...

Send flowers to the Scheel family.