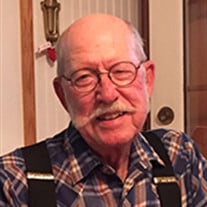 Robert "Bob" Dillon died January 6, 2022 at his home in Shelby, Iowa at the age of 81. Robert was born on the family farm south of Taneyville, Missouri on November 15, 1940. He was born to Oscar Jerry and Pearl Lorane (Sellars) Dillon. Robert grew up on the family farm and attended Dickens County School the first four years of education. The next four years he attended Taneyville Elementary. He graduated from Forsyth High School in 1958. After graduation from high school, he joined the USAF during October of 1958. During the next four years, he spent time at Ellsworth AFB, SD, Daharan AFB, Saudi Arabia, and in Turkey where he lived on the local economy in Instanbul. The last year was spent serving the Armed Forces Courier Service, carrying Top Secret Material throughout several countries. After discharge from the Air Force in 1962, he worked for Beebee and Runyan Furniture Company in Omaha, Nebraska for 8 years. Robert married Carol Wood on June 11, 1961 in Rapid City, South Dakota. The family moved from Omaha to Shelby, Iowa in 1964. One child, Leah C. (Dillon) Gintz was born to that union in 1965. The marriage ended in 1979. He married Jan (M. Gustafson) Dillon on June 4, 1983 at the Gustafson family farm near Axtell, Nebraska. Robert lived in Shelby with his wife until the present time. Robert hauled feed and grain for Shelby Livestock Supply from 1971 to 1992. He then hauled grain for Hancock Elevator until retirement in 2007. After retiring from the elevator, he did part time work hauling grain for farmers during harvest and helping the local Farm Service Coop haul fertilizer. He also worked as a farrier for several years. He had his own forge and made his own horseshoes. Bob was said to be a teacher, loving to share what he loved. He did it with patience and humor, and honored those he was teaching with respect. He shared his love of fishing, boating, driving, shooting/gun safety. He had a quiet wisdom that never needed to be the center of attention but rather looked to the needs of others first and foremost. Travel was the highlight with so many outstanding trips always driving with safety first, an eye for his equipment, and still able to spot a critter off in the distance before anyone else. The Alaska journey of eleven weeks and 13,000 miles was at the top of the list with a comment one day on the AL-CAN Highway of "I keep driving and I don't seem to get anywhere." That was after a day of driving 100 plus miles not exceeding 12 mph so we would still have a pickup and 5th wheel for the rest of the trip. And he would say that wasn't the worst road he drove that trip. He is preceded in death by his parents O. Jerry Dillon and Pearl L. (Sellars) Dillon of Taneyville, MO; his younger brother Jerry L. Dillon of Aurora, MO; older brother Eugene Dillon of Dunnellon, FL and nephew Mike Dillon of Fort Smith AR. Robert is survived by his wife, Jan Dillon of Shelby, Iowa; daughter Leah (Tim) Gintz of Papillion, Nebraska; grandsons James (Kate) Gintz and great granddaughter Lucie of Omaha, Nebraska; Jacob Gintz (fiancé Erin Wagner) of Omaha, Nebraska; sister Daisy Madsen of Taneyville, Missouri; sisters-in-law Marilyn Dillon of Independence, Missouri; Evelyn Dillon of Aurora, Missouri; brother and sister-in-law Rich and Bonnie Lacy of Osceola, Nebraska; nephews Jeremy (Lori) Lacy of Broomfield, Colorado; Jeffrey (Erin) Lacy of Stromsburg, Nebraska; Tim (Ronda) Dillon of Dunellon, Florida; Juan Madsen of Forsyth, Missouri; Charlie (Christine) Dillon of Aurora, Missouri; nieces Cheryl Ann Mick of Taneyville, Missouri; Jennifer (Josh) Werth of Stromsburg, Nebraska; Rita (Craig) Brown of Aurora, Missouri; and numerous well loved grand nephews and nieces. Memorials may be directed to: Whittington Center PO Box 700 Raton, NM 87740 St Jude AL SAC/St Jude Children’s Research Hospital 501 St Jude Place Memphis TN 38105 Or NE Medicine Foundation PO Box 82555 Lincoln NE 68501-2555 Directed to N Medicine Neuro ICU and Neurology Dept (Lewy Body)

Robert "Bob" Dillon died January 6, 2022 at his home in Shelby, Iowa at the age of 81. Robert was born on the family farm south of Taneyville, Missouri on November 15, 1940. He was born to Oscar Jerry and Pearl Lorane... View Obituary & Service Information

The family of Robert Dillon created this Life Tributes page to make it easy to share your memories.

Send flowers to the Dillon family.