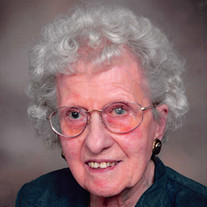 Rita Frances (Schneider) Reisz was born March 30, 1922 in Westphalia, Iowa to Michael and Catherine (Blum) Schneider. She attended St. Boniface Catholic Church was baptized and confirmed and graduated 8th grade from the school. While working for John and Sabina Reisz she met John’s brother, Frank. On March 2, 1943 Rita and Frank were united in marriage at St. Boniface Catholic Church in Westphalia, Iowa. The Reisz family made their home in the Panama area. Rita and Frank farmed and entered the fertilizer business in the late 50's. They were owners of Panama Fertilizer Company until the fall of 1982. They retired into town in 1977. They are parents of 6 children. Rita was a member of St. Mary’s Catholic Church for 76 years. She served as chair of Parish Groups and was a member of the Sewing Circle and Senior Citizens where she served as Vice President and President for a number of years. Rita and Frank loved traveling the Iowa area to square dance. Working in her flower garden was a favorite pastime as well as making quilts for grandkids weddings and great grandkids births. When her eyesight worsened Rita had to give up these pastimes. She also loved playing cards, vacation at her lake cabin in Hackensack, Minnesota, travel the USA with her daughters and to visit her grandchildren/great-grandchildren. Rita said, “I want to go to Las Vegas one more time” at least 4 more times. When she didn’t want to fly anymore it changed to “ I want to go to Branson one more time” and December 2018 was her last trip. She loved country music and was able to meet and get a picture with Danny O’Donnell and Maggie Mae. The only way she’d stay up late was to listen to Cubs baseball or to any Harlan Cyclone games. Rita died surrounded by her loving family at her home in Panama on Wednesday, October 20, 2021, attaining the age of ninety-nine years, six months and twenty days. Preceded in death by her husband Frank Reisz, sons Michael and Gene Reisz and son-in-law Harlan King, parents Michael and Catherine Schneider, brothers Ambrose “Bud” and Jim Schneider and sister Ella Mae Gross. Survivors include her daughters Mary (Bob) Weis of Woodbine, Iowa; Barb King of Panama, Iowa; Phyllis (Mark) Bishoff of Waterloo, Nebraska; and Fran (Ken) Slaven of Portsmouth, Iowa; brothers Urb (Joan) Schneider of Harlan, Iowa; Don Schneider of Colorado Springs, Colorado; and sister Arlene (Merlin) Carter of Manning, Iowa; 15 grandchildren; 28 great grandchildren plus one on the way; nieces and nephews; and friends. Family suggests memorials be made to Myrtue Hospice, Shelby County Catholic School, or St. Mary's of the Assumption in Panama.

The family of Rita Frances Reisz created this Life Tributes page to make it easy to share your memories.

Send flowers to the Reisz family.