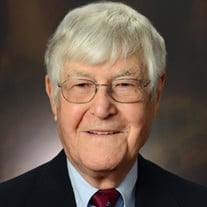 Richard Derald Wittrup was born in a farmhouse near Marne, Iowa on a rainy Saturday in 1926, the only son and first child of Otis and Ruby Wittrup. The story is that his mother left a cow half milked to give birth in the house on a straw tick.... View Obituary & Service Information

The family of Richard D. Wittrup created this Life Tributes page to make it easy to share your memories.

Richard Derald Wittrup was born in a farmhouse near Marne, Iowa...

Send flowers to the Wittrup family.