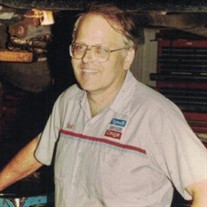 In lieu of flowers, memorial contributions can be made in honor of Richard to St. Joseph’s Catholic Church or the Earling Volunteer Fire Department. Richard Matthias Wilwerding, the oldest son of Peter A. and Anna (Leuschen) Wilwerding, was born on October 3, 1942, on the family acreage near Earling, Iowa. He attended St. Joseph's Catholic School in Earling, where he graduated in 1961. During high school, Richard worked at Ivo Finken's Garage until joining the United States Air Force, where he worked as a mechanic. Richard served his country until he was honorably discharged in 1965. During his 45 years at the Harlan Auto Mart, Richard became one of the first Chrysler Gold Certified Master Technicians in the entire Midwestern United States. His impressive amount of both training and on-the-job experience earned him a rapport in his industry that was more-or-less unparalleled and proven by his stack of awards. In his younger days, Richard enjoyed racing stock cars. Richard enjoyed reading, watching movies, listening to Los Angeles Dodgers games, and tinkering on cars and lawnmowers. He was a collector of many things, and he loved to go to second-hand stores to find "treasures." Richard also enjoyed prairie dog hunting in Nebraska with his brother, Jerry, and nephews. Richard died in his home, the same house he was born in, on Thursday, July 9, 2020, attaining the age of seventy-seven years, nine months, and six days. He was preceded in death by his parents. He is survived by his siblings Jerry Wilwerding of Harlan, Iowa; Eugene (Jan) Wilwerding of Harlan, Iowa; Jackie Wilwerding of Earling, Iowa; many nieces and nephews; and friends.

In lieu of flowers, memorial contributions can be made in honor of Richard to St. Joseph&#8217;s Catholic Church or the Earling Volunteer Fire Department. Richard Matthias Wilwerding, the oldest son of Peter A. and Anna (Leuschen) Wilwerding,... View Obituary & Service Information

The family of Richard Matthias Wilwerding created this Life Tributes page to make it easy to share your memories.

In lieu of flowers, memorial contributions can be made in honor...

Send flowers to the Wilwerding family.