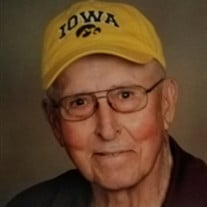 Richard Mathias Mikels was born on March 2, 1930 to Matt and Genevieve (Fuhs) Mikels. He was born at his farm home located northwest of Portsmouth, Iowa on the Harrison and Shelby County line. He told us his head was in one county and his butt was in the other. He was baptized and confirmed at St. Mary’s Catholic Church in Portsmouth where he remained a lifelong active member. At the age of four he attended Hemlock one-room country school where his oldest sister was his kindergarten teacher. Later, he attended St. Mary’s Catholic School in Portsmouth. He quit school after eighth grade to help farm with his dad and brothers. At the age of 15 he helped plant corn with an SC Case tractor and a new 2 row planter with steel wheels. November 1951, he was drafted into the military during the Korean War. He was chosen to join the Army Corp of Engineers stationed in France. While there he was able to see parts of Paris, France; London, England; and Rome, Italy. He also attended the coronation of Queen Elizabeth II, often joking that she waved to him. When he returned from France in 1953, he reunited with his fiancé, Jeanette Rau and they were married December 30th that year at St. Mary’s Catholic Church. Five children were born to this union. They farmed North of Portsmouth for a year, then moved to the present farm East of Portsmouth where they raised their family. Dick farmed until his retirement in 2010 but he was still the boss. He continued to live on the farm after Jeanette’s death in 2010. He and Jeanette enjoyed traveling, keeping in touch with “army buddies” over the years. They traveled with their children and friends visiting thirty-nine of the fifty states. He enjoyed music and visiting people and was known to tell a story or two to make them smile. He was known to tease the grand kids and wind them up just before leaving. He shared common sense advise like, “It is just as easy to keep the top half of the gas tank full as it is the bottom” or “The little disappointments get you ready for the big ones” and finally “Be careful”. He was an active member of Portsmouth American Legion 547 for over 65 years. He marched and carried the flag, with honor, for as long as he was able. Dick moved off of the farm in October 2016 and moved to Harlan, Iowa. While living in town, he continued to check on the farm and mow the lawn. Due to failing health he had been residing at Elm Crest Senior Living since March 2020. Dick died peacefully on November 16, 2020 having attained the age of ninety years eight months and fourteen days. In addition to his parents, he was preceded in death by his wife Jeanette, grandson Christopher Ferry, his siblings; Veronica Klein, Ed Mikels, Raymond Mikels, Al Mikels, Eva Slaughter, and Delmar Mikels. Left to cherish his memory are his children Lyle Mikels of Harlan, Iowa; Lynn (Lori) Mikels of Newbury Park, California; Jayne (Dan) Garrison of Harlan; Cheryl (Tom) Ferry of Harlan; Sue (Bret) Chickering of Harlan; six grandchildren; Daniel Ferry, Mathew Ferry, Dylan Garrison, Rhiana Chickering, Lynsey Mikels and Timothy Mikels, five great grandchildren; Seth and Taylin Ferry, Kristofer Ferry, Devin and Regan Kramer. His sister Dolores Hicks of Manhatten Beach, California; sister-in-laws; Mae Mikels of Woodbine, IA, Phyllis Mikels of Portsmouth; many nieces and nephews; other relatives and many friends.

Richard Mathias Mikels was born on March 2, 1930 to Matt and Genevieve (Fuhs) Mikels. He was born at his farm home located northwest of Portsmouth, Iowa on the Harrison and Shelby County line. He told us his head was in one county and his... View Obituary & Service Information

The family of Richard M Mikels created this Life Tributes page to make it easy to share your memories.

Send flowers to the Mikels family.