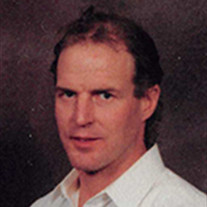 Richard Jorgensen, son of Gary and Camelia (Olsen) Jorgensen was born January 17, 1964 in Davenport, Iowa. As a child he enjoyed playing with his sisters Rachelle and Christy in the big blue house, spending countless hours with his grandparents and great-grandparents, shenanigans with the neighborhood boys, family trips, and weeks at Bible Camp. Here, Richard was baptized and we hold fast to him believing in Jesus Christ. Richard attended school at Harlan Community School but graduated from Wentworth Military Academy as a Lieutenant in Lexington, Missouri. Following graduation, Richard would take on a life of many odd jobs. Most of these jobs would take place outside. Among these jobs, were helping others and giving people a hand in whatever they might have needed at the time. He always loved his community and very rarely traveled beyond the Harlan and Fiscus areas. Just like all of us, Richard’s life was far from perfect. He had struggles that were deep and they carried on throughout most of his adult life. There was heartache in his life and yet the heartache remains still here in his death. We, as a family, were not ready for this, so it hurts. We are sad as we try to remember only the good. Of course, he is still loved and more importantly he is loved by our Father. Richard died of heart failure on Saturday, March 12, 2022 at his parents home in rural Harlan, attaining the age of fifty-eight years, one month and twenty-three days. He was preceded in death by his father, Dr. Gary Jorgensen. He is survived by his mother, Camelia (Olsen) Jorgensen of Harlan, Iowa; his son Ethan Jorgensen of Council Bluffs, Iowa; Ethan’s mother, Ann Mellinger of Portsmouth, Iowa; his sisters, Rachelle (Todd) Sorensen of Brentwood, Tennessee; Christina (David) McIllwain of Hendersonville, Tennessee; his aunt and uncle, Margaret and Paul Anheier of Denver, Colorado; many nieces and nephews, cousins, other relatives and many friends.

Richard Jorgensen, son of Gary and Camelia (Olsen) Jorgensen was born January 17, 1964 in Davenport, Iowa. As a child he enjoyed playing with his sisters Rachelle and Christy in the big blue house, spending countless hours with his grandparents... View Obituary & Service Information

The family of Richard Alan Jorgensen created this Life Tributes page to make it easy to share your memories.

Send flowers to the Jorgensen family.