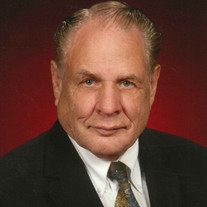 Richard “Doc” Lewis Dalbey, son of Richard and Dorothy (Lewis) Dalbey, was born on May 9, 1930 at Methodist Hospital in Des Moines, Iowa. He was admitted into the Cradle Roll of the Shenandoah Methodist Church in Shenandoah, Iowa on April 20, 1933. He graduated from high school with the class of 1947 at Coin, Iowa. Richard then attended Drake University for pre-med required courses and was accepted into the College of Veterinary Medicine at Iowa State University where he earned his doctorate. On April 14, 1951 Richard was united in marriage to Margaret Anne Barr, at Gatchel United Methodist Church in Des Moines, Iowa. Two daughters were born to this union, Rebecca and Sara. In 1961 Doc and Margaret moved to Harlan, Iowa and partnered with Earl Christensen at the Christensen Vet Clinic. In the late 1960's they moved to Audubon and then back to Harlan in 1970. In 1975 Doc left private practice and went to work for the Federal government with the Department of Agriculture as a veterinarian over meat inspection. Doc retired in 1996. Doc was a member of the Iowa National Guard, the United Methodist Church and active in the church choir and bible study. He was a member of Masonic Lodge, Parian Chapter #321, the Huff and Puffer Bicycle Club, the Society of Mayflower Descendants, Harlan Community Chorus and Theatre Guild, and Mensa. Doc and Margaret were instrumental in organizing and bringing to Harlan the Western Iowa Arts Association better known the Harlan Theatre Guild. He enjoyed acting in multiple performances, such as Oklahoma, Natalie Needs a Nightie, South Pacific and any opportunity to use his big bass voice. Perhaps one of his greatest joys were his many bicycles. He rode nearly every ride he could find, including RAGBRAI, Brann, Ride Over the Rockies, the Baja Peninsula and many more. The one thing that could put a sparkle in his eye every time were his children and his adoration for his grandchildren. Richard joined Margaret in heaven on June 7, 2019 at Salem Lutheran Home in Elk Horn, Iowa, attaining eighty-nine years and twenty-nine days. He was preceded in death by his wife Margaret of sixty-six years, sister Patricia Dalbey Jorgenson, brother-in-law Merton Barr, son-in-law Cole Findlay, and his parents. Left to treasure his memory are his children, Rebecca (Mike) McNabb of Omaha, Arkansas; Sara (the late Cole) Findlay of Panama, Iowa; grandchildren James (Kaila) Shields of Harlan; Katharyn McNabb of Houston, Texas; Amanda (Marcus) Erwin of Harlan; great grandchildren Camden Michael Shields, Madden James Rooney, and Kennedy Cole Erwin, all of Harlan; sister Barbara (Norman) Walker of Mesa, Arizona; brother-in-law Earl Jorgenson of Mead, Colorado; sister-in-law Louise Barr of West Des Moines, Iowa; nieces and nephews; other family members and friends.

Richard &#8220;Doc&#8221; Lewis Dalbey, son of Richard and Dorothy (Lewis) Dalbey, was born on May 9, 1930 at Methodist Hospital in Des Moines, Iowa. He was admitted into the Cradle Roll of the Shenandoah Methodist Church in Shenandoah, Iowa... View Obituary & Service Information

The family of Dr. Richard L. Dalbey created this Life Tributes page to make it easy to share your memories.

Send flowers to the Dalbey family.