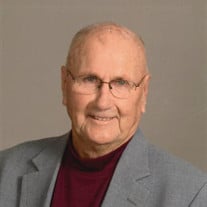 Not sure what to send?

Richard L. “Dick” Brown, son of Russell and Fern (Hultquist) Brown was born on November 2, 1938, on a farm in Rural Montgomery County near Villisca, Iowa. He was one of six children born to his parents. Dick attended a one room country school through eighth grade and graduated from Villisca High School in 1956. He participated in Football, Basketball and track. He also attended several education short courses. On June 7, 1959, Dick was united in marriage to Saundra Kay “Sandy” Brown at Stand Lutheran Church in Adams County, Iowa. Four children were born to this union: LuAnn, Robin, Roger and Scott. They made their home in Villisca (1 year), Shenandoah (4 years), Avoca (32 years), Wall Lake (16 years) and then back to Avoca in 2013. Dick has been a member of Trinity Lutheran Church every year they lived here and served as Treasurer of the Church Endowment Committee. He also was a volunteer participating with Worship Services. He was a member of the Mt. Nebo Masonic Lodge, Abu Bekr Shriners, Avoca Golf Course Board, Villisca Alumni Association Board, served 16 years on the Avoca Fire Department, plus many other Avoca Community organizations over the years. He also served 8 years in the Army National Guard. Dick spent most of his career in the Ag Fertilizer and Chemical Industry managing retail plants in Shenandoah, Avoca and Hancock and as a Regional Manager supervising retail plants in Missouri, Iowa and Minnesota. Dick enjoyed playing golf. The local golf course was near and dear to his heart as he was instrumental with helping Avoca get the current recreational facility which opened in 1975. He was proud of his lifetime of honesty and integrity and would not compromise it for anything or anybody. Dick was very proud of his family and loved spending time with them. Faith, Family and Friends were the keys to happiness in his life. Dick passed away with his loving family by his side at his home on Saturday, May 7, 2022, having attained the age of 83 years, 6 months and 5 days. He was preceded in death by his grandparents, father, father and mother-in-law, wife Sandy, daughter LuAnn Mead, sister Kristi Ferguson and her husband Rob, brother Bob Brown, brother-in-law Jake Tugel and sister-in-law Joan Brown. His is survived by his children Robin Andersen (Rich Bielenberg) of Harlan, Iowa; Roger (Wendi) Brown of Ankeny, Iowa; Scotty (Shelley) Brown of Underwood, Iowa; son-in-law Chris Mead of Glenwood, Iowa; mother Fern Brown of Villisca, Iowa; 7 grandchildren; 7 great-grandchildren; siblings Ron Brown of Villisca, Iowa; Linda (Tom) Klieman of Kewanee, Wisconsin, Vicky Tugel of Carlisle, Iowa; sister-in-law Elinor Brown; nieces and nephews, other family and many friends.

Richard L. &#8220;Dick&#8221; Brown, son of Russell and Fern (Hultquist) Brown was born on November 2, 1938, on a farm in Rural Montgomery County near Villisca, Iowa. He was one of six children born to his parents. Dick attended a one room... View Obituary & Service Information

The family of Richard "Dick" Brown created this Life Tributes page to make it easy to share your memories.

Send flowers to the Brown family.