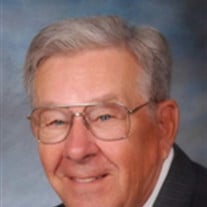 Raymond (Ray) Joseph Buman, age 87 of Harlan, Iowa passed away peacefully at his home on Sunday October 6, 2019 surrounded by family. Ray was born June 5, 1932 to William and Sidonia (Book) Buman at the family farm near Tennant, Iowa. Ray was fifth in line of six children. He was baptized at St Michael’s Catholic Church in Harlan, where he remained an active parishioner until his death. He graduated from Tennant Consolidated High School in 1949 and studied at St. Ambrose and Loras colleges in eastern Iowa before earning his bachelor’s degree in business from Creighton University in Omaha, Nebraska. Prior to his graduation from college, Ray worked as a reporter and photographer at WOW TV & Radio in Omaha. He began his career in accounting at a CPA firm in Omaha, where he remained until his marriage. Ray married Marian Ertl on August 3, 1957 at her home parish, Corpus Christi Catholic Church in Fort Dodge, Iowa. They began their family in Carroll, Iowa where he continued in accounting until they moved to Harlan, Iowa in 1959. There he opened his own accounting and tax business from which he retired in 2007. His career spanned 53 years. Ray and Marian welcomed eight children, 25 grandchildren, and 14 great grandchildren into the family. Ray served St Michael’s parish and school in many ways. He was a member of the first school board there, taught teenagers in the religious education program, and served on the parish council. Having discerned the priesthood himself, he remained steadfast in promotion of vocations to the priesthood and religious life. Ray also served his community, perhaps most notably as a volunteer leader with the Boy Scouts of America for over 12 years. He held many positions with the Mid America Council and received the Silver Beaver award, the highest honor awarded adult volunteers. Ray was also a third degree member of the Knights of Columbus and a member of the Elks. An avid hunter and fisherman, Ray traveled many places to enjoy outdoor sporting. His primary destination was the lake country of Ontario, Canada in pursuit of walleye, Northern pike, and black bear. He enjoyed the company of his wife, children, and many other family and friends on his many trips. Ray held a pilot’s license, enjoyed golf, delighted in his garden produce, built an impressive model railroad, and traveled extensively. He modernized the Shelby County Historical Society’s inventory system, introducing computer record keeping and helping build their database and served on their board. Most importantly, Ray cherished his family and loved God above all else. Ray is survived by his wife Marian of Harlan, Iowa; his children Michael (Sharon) Buman of Remsen, Iowa; Steven (Barbara) Buman of Bellevue, Nebraska; Gregory (Karen) Buman of Bellevue, Nebraska; Mary Beth (Bob) Clark of Carlisle, Iowa; Joanne (Tom) Kerins of Omaha, Nebraska; Douglas (Jennifer) Buman of West Linn, Oregon; Julie (Leonard) Hawkins of Bellevue, Nebraska; Richard (Angela) Buman of Le Mars, Iowa; 25 grandchildren; 14 great grandchildren; siblings Alice Bontz of Council Bluffs, Iowa; Don (Clarice) Buman of Harlan, Iowa; Norene (Ken) Pavlik of Verdigre, Nebraska; brother-in-law Francis Kenkel of Manilla, Iowa; sister-in-law Alice Buman of Harlan, Iowa. Ray was preceded in death by his parents, William and Sidonia Buman; in-laws Robert and Sophie Ertl; sister Mary Ann Kenkel; brother Ludwig Buman.

The family of Raymond Joseph Buman created this Life Tributes page to make it easy to share your memories.

Send flowers to the Buman family.