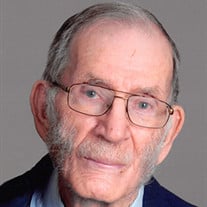 Ray McIntosh was born on a farm northwest of Tarkio, Missouri on March 30, 1929 to Harold and Mary (Gigous) McIntosh. Ray attended a one room schoolhouse for one year before moving to Tarkio where he attended the Public Schools graduating in 1947. Ray then proceeded to Tarkio College from 1947-1951. He graduated with a Bachelor’s Degree in Biology and Physical Education. While in college, Ray was a member of Alpha Lambda Sigma, played football, basketball, and track, eventually earning several Varsity letters. In 1951, Ray was drafted into the U.S. Army, where he served until 1953. During his time in the Army, Ray was stationed in Houston and New York among others. Ray spent much of his time in a laboratory as a technician testing petroleum products primarily. While stationed in New York Ray attended several baseball games and Broadway plays. Continuing his love of both for the rest of his life. Upon being honorably discharged from the Army, Ray returned to Tarkio where he met the love of his life, Barbara Enarson. Barbara graduated from Tarkio College and the two were married on April 29, 1954. They lived ‘happily ever after.’ To this union four children were born, Angie, 1958, Joe, 1959, Mary, 1961, and Bob 1963. In the fall of 1954 Ray started his long lived teaching career in Dunbar, Nebraska. After one year he and Barbara moved to Osceola, Iowa, and seven years later, moved to Irwin. Irwin would become the last stop for Ray and Barbara as he taught for 30+ years in the district. Although he could teach nearly any and all subjects, Ray primarily focused on Science. He taught kids, their kids, and a few times even their kids. Three generations of Mr. McIntosh as a Science Teacher. Ray was knowledgeable and tough. Ray often said he was not the most liked teacher, but he enriched the lives of many and was far more appreciated by students then he would realize. Tributes and testimonies would follow him for years from former students. Ray's love of sports led him to coach many different teams at both the Junior and Senior High levels. As a coach, he once again had a very positive impact in the lives of many. In Irwin, Ray would become active in the United Methodist Church, the community and the school. Ray was a religious man and regularly rounded up the family to attend church on Sundays and many activities associated with the church. Ray was an avid card player, gardener, a Mason and a member of the Eastern Star Association, and enjoyed his daily walks and coffee conversations with his friends. Ray loved poetry, music, and reading and passed that on to many including his wife and family. More than anything else, Ray loved his wife and loved his family. This love became more evident at every family gathering, every holiday or any other get together that would arise. As his family grew from two, to six to 10, 15, 20 to over 30, his love grew with it. A love that was nurtured, passed on, and will endure for generations to follow. Ray touched so many lives during his time as a teacher, coach, church and community leader. He made his presence felt in his hometown of Irwin. Ray lived a great life, served his Country, served his community and served his family. He leaves a great legacy, a loving family, and a treasure of memories. Ray is survived by his wife Barbara McIntosh of Harlan, IA; children Angela (Chip) Sherman of Kansas City, MO; Joseph (Dr. Faye Perkins) McIntosh of Teton Village, WY; Mary (Scott) Oliver of Dearborn, MO; Bob (Theresa) McIntosh of Montrose, MO; 10 grandchildren; 9 great grandchildren; sibling James (Norma) McIntosh of Savannah, MO and many beloved nieces and nephews.

Ray McIntosh was born on a farm northwest of Tarkio, Missouri on March 30, 1929 to Harold and Mary (Gigous) McIntosh. Ray attended a one room schoolhouse for one year before moving to Tarkio where he attended the Public Schools graduating... View Obituary & Service Information

The family of Ray Erwin McIntosh created this Life Tributes page to make it easy to share your memories.

Ray McIntosh was born on a farm northwest of Tarkio, Missouri...

Send flowers to the McIntosh family.