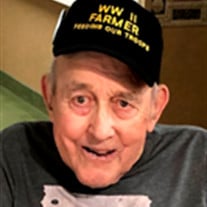 Raleigh Ernest Woltmann was born June 20, 1924, to Ernest and Irene (Jens) Woltmann in Shelby County, Iowa. When he was five, the family moved to a farm west of Avoca where Raleigh farmed with his father, and later his son until he was in his late eighties. He attended country school at Township Number One with his sister, Corrinne (Woltmann) Schue. He later attended high school at Avoca and graduated in 1942. After high school, Raleigh received an agricultural deferment from World War II service. Raleigh married Marilyn June Raasch, his devoted wife of fifty-eight years, on April 16, 1961, in Bridgewater, Iowa. To that marriage were born three children, Nancy (Woltmann) Faselt of Iowa City. (husband, John Faselt; children Nick, Jessica, Nathan, Nolan, and one deceased infant daughter); daughter, Lois Woltmann, of Carrollton, Texas; son, Justin Woltmann, of Avoca (wife, Becky; sons, Hayden and Jackson Woltmann; and stepson, Jake Stevens, and his wife Krista, parents to Raleigh's great-grandson, Weston.) Raleigh had numerous interests and hobbies including collecting stamps, coins, watch fobs, tractor seats, corn sacks, license plates, and antique tin toys. He restored many antique tractors and cars including his prized Case steam engine. He also loved photography. Raleigh attended many clubs: Rural Youth Club, Hawkeye CB, Council Bluffs Stamp Club, and Iowa Tractor Seat Club. He was an early founding member of the Mount Pleasant Old Threshers and a member of the United Church of Avoca. Raleigh was a hard-working farmer and loved the land. In the early days, Raleigh was involved in a farming mishap that cost him several fingers, but that never bothered him or slowed him down, as he always accepted things and moved on. Along with his father and mother, Raleigh raised certified seed corn and oats and prized Woltmann Hybrids seed sacks for years. He raised Black Angus cattle, hogs, corn, alfalfa, oats, and soybeans. Raleigh saw many changes in farming technology in his ninety-five years, from picking corn by hand to later riding in a GPS driven combine aside his son. Raleigh enjoyed attending many steam shows: Eshelmann's Steam Show in Elliot, Iowa, a place where he featured his steam engine and displayed it for thrashing demonstrations; Mount Pleasant Steam Show in Mount Pleasant, Iowa; Carson Farms Show in Shelby, Iowa; the Green Ridge Show in Irwin, Iowa, and the Rollag Steam Show in Minnesota. Raleigh had a passion for life and never spent a minute without pursuing a hobby or interest. He was an avid reader of history and loved to travel. His travels took him and Marilyn to almost 50 states, and various countries, including Germany, Switzerland, England, Canada, Mexico, and the Caribbean. Raleigh and Marilyn flew the Concorde to England and returned to the U.S. on the Queen Elizabeth ship. In his travels, Raleigh met many interesting people including Margaret Thatcher, Chuck Norris, Robert Stack, and John Walsh. He loved and treated everyone with respect and courtesy. As a boy, he attended the World's Fair in Chicago in 1933 and drove cross-country in a Model A to the World's Fair in San Francisco in 1939. Raleigh visited Mount Rushmore while it was still under construction and was able to hike to the top where he stood on the heads of the monument. For many years, Raleigh and Marilyn lived on an acreage in Avoca and had many memorable years there. Two of the fondest memories at the acreage were his eightieth "Steam Up" birthday party, featuring his Case steam engine, and his ninetieth birthday party where he was surrounded by family and friends. After moving from the acreage, Raleigh and Marilyn lived in an assisted living facility near their daughter Lois, in Carrollton, Texas, for several years, and then moved near their daughter, Nancy, in Iowa City. Most recently, they spent the past year at the Avoca Care Center near their son, Justin. Even with Raleigh's declining physical condition he still was interested in farming and local activities. He was honored to attend Avoca's 150th celebration this summer, observing his restored steam engine in the parade being driven by his son, Justin, and his grandsons. He was preceded in death by his parents Ernest and Irene Woltmann; his sister, Corrinne (Woltmann) Schue; brother-in-laws Albert Schue and Everett Raasch; and sister-in-law, Margaret Raasch. Raleigh will be deeply missed by his wife, children, grandchildren, great-grandchild, many nieces and nephews, other relatives, and many friends. He was truly a member of the Greatest Generation and will be remembered fondly by all who knew and loved him.

Raleigh Ernest Woltmann was born June 20, 1924, to Ernest and Irene (Jens) Woltmann in Shelby County, Iowa. When he was five, the family moved to a farm west of Avoca where Raleigh farmed with his father, and later his son until he was in his... View Obituary & Service Information

The family of Raleigh Ernest Woltmann created this Life Tributes page to make it easy to share your memories.

Send flowers to the Woltmann family.