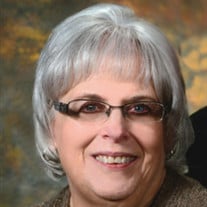 Priscilla Ann Thraen, daughter of Howard and Anna Irene (Herbold) Michaelsen, was born June 3, 1949 in Sioux City, Iowa. She was baptized and confirmed at Salem Lutheran Church in Rural Correctionville, Iowa. She attended Pierson Elementary and Kingsley Pierson High School. After graduation, Priscilla attended beauty school in Le Mars, Iowa. On November 25, 1972, Priscilla was united in marriage to Marcus Thraen at St. Joseph’s Catholic Church in Earling, Iowa. Together they raised four children: Kristine, Scott, Jennifer, and Andrew. Priscilla tended to the household and was able to enjoy time with her children while they were growing up. She became a school room mother and would help drive on field trips, she was always there to cheer her kids on at sporting events. After marriage, she became a member of St. Joseph’s Catholic Church. Priscilla enjoyed crocheting and quilting, she also enjoyed quiet time with a good book. Time she enjoyed the most though was with her family and her babies, she loved her grandchildren. She was a loving wife, mother, grandmother, sister, and aunt. Priscilla died on Thursday, January 9, 2020 surrounded by her loving family at Oakland Manor in Oakland, Iowa, attaining the age of seventy years, seven months, and six days. She was preceded in death by her parents Howard and Anna Irene Michaelsen. She is survived by her husband of 47 years Marcus Thraen of Earling, Iowa; children Kristine (Thomas) McCoy of Sioux Falls, South Dakota; Scott Thraen of Urbandale, Iowa; Jennifer (Jeffery) Grimsley of Bennington, Nebraska; Andrew (Mary) Thraen of Papillion, Nebraska; grandchildren: Victoria, Olivia, Maryssa, Collin, Emily, and Jameson, sister Sally Nairn of Harlan, Iowa; nieces and nephews, other family members and many friends.

The family of Priscilla Ann Thraen created this Life Tributes page to make it easy to share your memories.