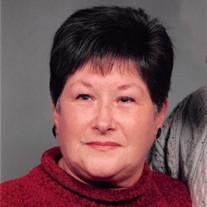 Phyllis Joan Smith was born on January 7, 1932, to Estill and Blanche (Bolin) Rossean in Hamburg, Iowa. Her family moved to Harlan during her teen years, and she graduated from Harlan High School in 1949. She enjoyed performing in operettas and played the lead during her senior year. She worked at the Cozy Theater in Harlan while in high school and often talked about how she got to see every show. After high school, she worked as a dental assistant and regaled her family with stories of how she used to mix mercury fillings in the palm of her hand. In 1950 Tiny married Donald Jensen, and to the union three children were born: Diane, Brian, and Lisa. She and her family ran the County Farm, a care facility for disabled persons, for several years. Later her family moved back to Harlan, and Tiny began working at Hy-Vee. She worked there for around 20 years in different positions from the Bakery, Meat Department, and as a checker. She loved meeting people and interacting with them while she worked. Tiny was united in marriage to Marlin Smith on November 22, 1980, in Harlan, Iowa. Tiny then helped raise a second family of kids. She loved to dance to country music and play cards. Her children, grandchildren, great-grandchildren, her cats and dogs were her pride and joy. She loved babies and caring for animals, ranging from baby birds and squirrels to orphaned puppies and calves. The family even brought her dog, Julie, to the hospital to see her. On Thursday, August 19, 2021, Tiny passed away at Myrtue Medical Center in Harlan, having attained the age of eighty-nine years, seven months, and twelve days. She was preceded in death by her parents; son Brian Jensen; daughter Lisa Miller; and siblings Lois, Charles, John, Max, and Midge. Left to cherish her memories earth side are her loving husband Marlin Smith of Panama, Iowa; children Diane (Dave) Jacobsen of Harlan, Iowa; Sue (Scott) Duhachek of Oakland, Iowa; Jay (Bobbi) of New Virginia, Iowa; Lori (Brent) Hugen of Albia, Iowa; son-in-law Dave Miller of Panama, Iowa; 17 grandchildren, 22 great grandchildren, 2 great great grandchildren; nieces and nephews, other family and many friends.

Phyllis Joan Smith was born on January 7, 1932, to Estill and Blanche (Bolin) Rossean in Hamburg, Iowa. Her family moved to Harlan during her teen years, and she graduated from Harlan High School in 1949. She enjoyed performing in operettas... View Obituary & Service Information

The family of Phyllis "Tiny" Smith created this Life Tributes page to make it easy to share your memories.

Send flowers to the Smith family.