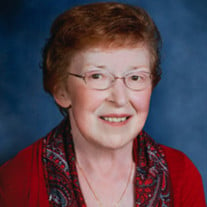 Phyllis Ann Monahan was born to Ural and Evelyn (Bissen) Smith on September 28, 1942 near Dunlap, Iowa. She was baptized and confirmed at St. Mary’s Catholic Church in Panama, Iowa. She attended country school through 8th grade, the graduated from St. Mary’s High School in Panama, Iowa in 1960. She graduated from Mercy Hospital School of Nursing in Council Bluffs, Iowa in 1963 and became a Registered Nurse. On October12, 1963, she was united in marriage to Kenneth Monahan at St. Mary of Assumption Church in Panama. They were blessed with five sons: Jeffrey, Kurt, Thomas, Dean and Lon. They lived in Portsmouth, Iowa. She worked at a physician’s office for one year, then at Myrtue Medical Center until retirement in 2002. During those years she also worked for IWCC as an instructor in their Nursing Program. While her children were growing up she worked part-time to be able to spend time with them and attend school academic and sport events. Phyllis was a member of Our Lady of Fatima Catholic Church, the Altar Society, and taught CCD for several years. In 1990, she and Ken moved to Harlan, Iowa and became members of St. Michael’s Catholic Church, where she joined the Ladies Guild. She loved to cook and bake for family and friends. She enjoyed vegetable and flower gardening, reading, riding her bicycle and water skiing. Most of all, she loved time with her husband, children, grandchildren and great grandchildren. Phyllis died on Wednesday, April 3, 2019 at Elm Crest Retirement Community in Harlan, Iowa, attaining the age of seventy-six years, six months, and six days. She was preceded in death by her parents, sister Marilyn Kleffman, and grandson-in-law Jorge Lopez-Hansen. She is survived by her husband of 56 years Kenneth Monahan of Harlan, Iowa; sons Jeffrey Monahan and Laura Roberts of Portsmouth, Iowa; Kurt (Stancey) Monahan of Carpinteria, California; Thomas (Sandra) Monahan of Cedar Rapids, Iowa; Dean (Alicia) Monahan of Harlan; Lon (Kristi) Monahan of Polk City, Iowa; 9 grandchildren Justin (Ann) Monahan and Abby Lopez-Hansen; Austin Monahan; Max, Rylen and Gracie Monahan; Mckrae, Adra and Kenna Monahan; great grandchildren Jorge Lopez-Hansen and Kinsley Monahan; brothers Norman (Jean) Smith of Dunlap, Iowa; Gaylen (Zita) Smith of Portsmouth, Iowa; Roland Smith of Panama, Iowa; Randy (Bonnie) Smith of LaVista, Nebraska; Dan (Tammy) Smith of Bondurant, Iowa; nieces and nephews; other family members and many friends. In lieu of flowers, the family has suggested that memorials be made in her honor to the Arthritis Foundation of Iowa.

Phyllis Ann Monahan was born to Ural and Evelyn (Bissen) Smith on September 28, 1942 near Dunlap, Iowa. She was baptized and confirmed at St. Mary&#8217;s Catholic Church in Panama, Iowa. She attended country school through 8th grade, the... View Obituary & Service Information

The family of Phyllis Ann Monahan created this Life Tributes page to make it easy to share your memories.

Send flowers to the Monahan family.