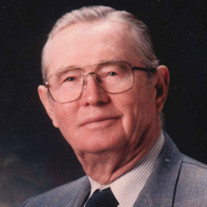 Philip Ward Madson, son of Peter and Lona (Jensen) Madson, was born on December 27, 1923 in Rural Shelby County near Avoca, Iowa. He was baptized and confirmed at Altamont Baptist Church in rural Harlan. He remained a lifetime member. Phil attended Fairview Township #6 country school through the 8th grade and then graduated from Harlan High School in 1940. After graduation, Phil continued to farm with his parents. After three years of dating Pearl Elaine Thomson, they were united in marriage on February 6, 1946 at her parents’ home. They rented a farm until purchasing their own family farm. Phil continued farming long after his retirement. Even at the age of 92 years, he was out helping unload grain; and he was always interested in how the cattle were doing. Phil loved to fix things, he would buy used and broken-down machinery and give it a new life. He would rather buy used for fixing than buy anything brand new. Phil served as President of the Shelby County Farm Bureau, where he became a State and National delegate. He was active in the church including service as a deacon. Phil also served on the Walnut School Board, as a 4-H leader and a Monroe Township Clerk. Phil and his wife loved to travel, which took them to Europe, Alaska, Hawaii and many of the lower 48 states. He also loved music, and he passed that love to his children and grandchildren. Phil died surrounded by his loving family at Peace Haven in Walnut, Iowa on Sunday, February 2, 2020 having attained the age of ninety-six years, one month and six days. In addition to his parents, he was preceded in death by his siblings Virginia Broughton, Jeanette Dunn, Marjorie Custer, and Paul Madson. He is survived by his wife Pearl Madson of Harlan, Iowa; children Ellen Madson of Norman, Oklahoma; Philip (Conchi) Madson of Cincinnati, Ohio; Larry (Paulette) Madson of Harlan, Iowa; Gwenn (Traci) Williams of Des Moines, Iowa; grandchildren Peter (Martine Greco) Madson, David (Lise Aftergut) Madson, Spencer Williams, Natalie (Ryan Stephens) Williams, Gabriel Madson; great grandchildren Pierce Madson, Ella Madson, Evangeline Concienne, Ezra Concienne, nieces and nephews, other family members and friends.

Philip Ward Madson, son of Peter and Lona (Jensen) Madson, was born on December 27, 1923 in Rural Shelby County near Avoca, Iowa. He was baptized and confirmed at Altamont Baptist Church in rural Harlan. He remained a lifetime member. Phil... View Obituary & Service Information

The family of Philip Ward Madson created this Life Tributes page to make it easy to share your memories.

Send flowers to the Madson family.