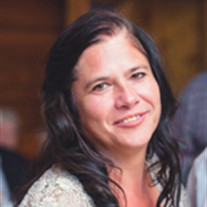 Penny Jean Swensen-Jacobsen, daughter of Levi and and Jeanette (Parr) Swensen, was born on October 23, 1960 in Harlan, Iowa. Penny was baptized and confirmed in the Lutheran faith and attended school in Harlan graduating with the Harlan Community High School class of 1979. When Penny was young she worked along side her father milking cows at their family Dairy outside of Corley. Penny worked as a CNA at the Baptist Memorial Home in Harlan which later became Elm Crest Nursing Home. She obtained her LPN degree in 1989 and later her RN degree in 1990. Penny began her nursing career at the Salem Nursing Home in Elk Horn, Iowa; then became the Director of Nurses at the Avoca Nursing and Rehab in Avoca, Iowa. She returned to Elm Crest in Harlan where she ran the Assisted Living section of the nursing home and finally at the Manning Plaza Nursing Home in Manning, Iowa. On December 3, 1992, Penny was united in marriage to Neal Jacobsen in Harlan, Iowa. Two daughters were born to this union: Marye and Alison. Into her adult life she continued to work alongside her father raising hogs and running a farrowing operation outside of Atlantic. After she was married and the family moved to the farm outside of Kimballton she started her own little herd of cattle one bucket calf at a time. Each Wednesday night her and her girls would make a trip into Kimballton to buy a bucket calf. In the beginning she used the back seat of her little Ford Ranger to transport the calves until the families cattle operation became more immense. They finally purchased a new Chevy Silverado and a trailer in which she was very proud of. She also loved all of her chickens. When her children were young they always had incubators running to hatch out chicks. For years she always enjoyed taking eggs to work to give away. Penny was a devout mother, sister, wife, nurse, friend etc the list goes on and on. Her work ethic and special love for the geriatric population was evident in all her nursing jobs which were all primarily long term care. Her contagious laugh and ability to connect with anyone she met made her loved by everyone. Even in death she continued to help others through organ donation. Penny died at the Myrtue Medical Center in Harlan, Iowa on May 28, 2021 having attained the age of sixty years, seven months and five days. She was preceded in death by her parents. Penny is survived by her husband, Neal Jacobsen of Kimballton, Iowa; her daughters: Marye and her husband Zach Krajicek of Kimballton and Alison and her husband Brent Chambers of Hamlin, Iowa; her sisters: Cindy and her husband John Schechinger of Harlan, Iowa and Michelle and her husband Kelly Jacobsen of Elk Horn, Iowa; nieces and nephews; other relatives and many friends.

Penny Jean Swensen-Jacobsen, daughter of Levi and and Jeanette (Parr) Swensen, was born on October 23, 1960 in Harlan, Iowa. Penny was baptized and confirmed in the Lutheran faith and attended school in Harlan graduating with the Harlan Community... View Obituary & Service Information

The family of Penny Jean Swensen-Jacobsen created this Life Tributes page to make it easy to share your memories.

Penny Jean Swensen-Jacobsen, daughter of Levi and and Jeanette...

Send flowers to the Swensen-Jacobsen family.