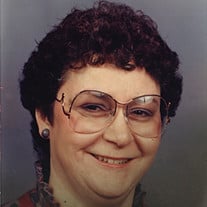 Paula Jean Behrendt Paula Jean Behrendt, daughter of Wayne Thomas and Mary Alice (Ramey) Darling was born in Harlan, Iowa on August 26, 1943. Since she was the first grandchild in both families, she was probably a wee bit spoiled for the first year and a half of her life. She grew up on a farm southwest of Irwin and attended school in Irwin, graduating with the class of 1961. She was excited to start her first day of school on her 6th birthday. After receiving her degree in Library Science from the University of Northern Iowa, she began her career as a school librarian in the Harlan Community Schools for 37 years, most of them in the middle school. The last few years, she also taught the computer classes. During this time, she also served as secretary of the Shelby County Fair and executive secretary of the Iowa Educational Media Association. She retired from teaching in 2002 and in 2003 started working for Shelby County Extension as the Office Coordinator, a position which she held until her retirement in 2012. She married Clifford Behrendt on June 5, 1965 at the Irwin Methodist Church. They were the parents of one daughter, Sherry. In addition to helping Cliff with chores on the farm, she volunteered her time as fair superintendent, library board and library foundation board member, RAGBRAI committee, Boots to Heels, and Delta Kappa Gamma. She was honored to have been inducted into the Shelby County Fair Hall of Fame, the Iowa 4-H Hall of Fame, and been named Shelby County Citizen of the Year in 2009. Paula loved to travel and was fortunate to have traveled extensively in her later years. She loved her pets and treasured her rat terriers as well as her cats, Snowball and Sugar, who kept her company for almost 17 years. She loved to read and rarely went anywhere without a book in her purse. Doing puzzles to keep her brain active consumed a lot of her time. In January of 2017, Paula made her home in Omaha before returning to Harlan in December of 2021. Paula died at UNMC in Omaha on May 13, 2022. In addition to her parents and husband, she was precede in death by her sister and brother-in-law, Connie and Bob Seipel. She is survived by her daughter, Sherry Behrendt (Mark Helinski) and his daughter Haley; her brother Jeff (Lora ) Darling; sister-in-law Mildred Behrendt; nieces and nephews and other relatives and friends.

The family of Paula Behrendt, created this Life Tributes page to make it easy to share your memories.

Send flowers to the Behrendt family.