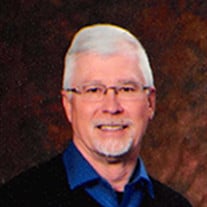 Paul Harley Kruse, son of Harley Paul and Teresa (Pfeifer) Kruse was born May 13, 1953 in Council Bluffs, Iowa. He was baptized at St. Anne Catholic Church in Logan, Iowa and confirmed at St. Michael’s Catholic Church in Harlan, Iowa, where he’s been a member since the 2nd grade. Paul graduated from Harlan High School with the class of 1971. In 1972, he graduated from Universal Technical Institute in Omaha, Nebraska to work in air conditioning and refrigeration. Paul married the love of his life, Virginia Mae Gross on April 28, 1973 at St. Peter’s Catholic Church in Defiance, Iowa. They started their life together in Kirkman, Iowa. To this union 5 children were born. In 1979, he built his family’s home on an acreage outside of Kirkman. He started Kruse Refrigeration and Electric in 1982. He enjoyed his job and there wasn’t anything he couldn’t fix. Paul loved traveling with Virginia. They loved the wind therapy from riding their Harley Davidson Motorcycles. After an accident in 2019, they gave up the motorcycles and bought a Camaro SS convertible so they could continue their wind therapy. Paul was very proud of his grandchildren and went to as many of their sporting events as he could. Paul and Virginia experienced the beauty of our country over the last couple years. They took full advantage of the time they had together to travel. Paul died on Wednesday, February 9, 2022 at CHI Health - Immanuel in Omaha, Nebraska, attaining the age of sixty-eight years, eight months, and twenty-seven days. He was preceded in death by his father Harley, and brother Clifford. He is survived by his wife Virginia Kruse of Harlan, Iowa; children Tanya (Tracy) Raske of Prairie City, Iowa; Jason (Michelle) Kruse of Norwalk, Iowa; Jaime (Ryan) Anderson of Chelsea, Michigan; Tony (Andrea) Kruse of Winterset, Iowa; Mike (Lea) Kruse of Boone, Iowa; 18 grandchildren; 3 great grandchildren; mother Teresa Kruse of Harlan, Iowa; siblings Karen (Mick) Patkalitsky of Centennial, Colorado; Jim (Shelly) Kruse of Waverly, Iowa; Gene (Lynne) Kruse of Portage, Michigan; Jon (Ann) Kruse of Draper, Utah; nieces and nephews; other family members and many friends.

The family of Paul Kruse created this Life Tributes page to make it easy to share your memories.

Send flowers to the Kruse family.