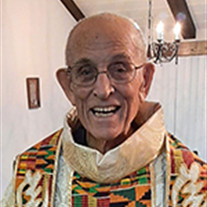 Paul Michael Koch, son of Leo and Pauline (Schulte) Koch was born on March 14, 1935 in Panama, Iowa. He was baptized and confirmed at St. Mary’s Catholic Church in Panama. He attended grade and high school at St. Mary’s School in Panama. He entered the seminary at Loras College, graduating in 1957. He then entered St. Bernard’s Major Seminary in Dubuque, Iowa. He was ordained a priest on May 28, 1961. Fr. Paul taught at Dowling High for 2 years before joining the missions in South America in 1963 with St. James the Apostle. He was sent to Peru then on to Bolivia, serving St. Pius the 10th in Oruro for 5 years. He became a worker priest in Santa Cruz for 3 years. Fr. Paul was appointed to the parish of Cabezas in Santa Cruz, and was the first appointed pastor for that parish for 25 years. Next, he went to La Guardia in Santa Cruz. He served until they closed the mission in Bolivia in 2009. At the age of 75, Fr. Paul returned to the United States to retire but was asked to help the Hispanic Community in Council Bluffs, Iowa. He began a Hispanic ministry for 5 years. He was forced to leave the ministry when he was diagnosed with stomach cancer in 2018. He spent a year recovering at his sister’s home in Omaha. He returned to Council Bluffs and helped with many parishes when needed. He later moved to Harlan, Iowa, where he helped with masses as needed. He also celebrated Sunday mass in Mondamin, Iowa. Fr. Paul died on Tuesday, November 23, 2021 at the University of Nebraska Medical Center in Omaha, attaining the age of eighty-six years, eight months, and nine days. In addition to his parents. he was preceded in death by his siblings Natalia Koch, Linus Koch, Louis Koch, Madonna Feldman, Charles Koch, Rev. Eugene Koch, and Richard Koch. He is survived by his siblings Walter (Elaine) Koch of Bentley, Iowa; Mary Agnes (LeRoy) Lampe of Omaha, Nebraska; sisters-in-law Geraldine Koch of West Des Moines, Iowa; Mary Koch Bell of Clark, SD; many nieces and nephews; friends, and fellow clergy. In lieu of flowers, memorials can be directed to Catholic Charities Fund of Des Moines.

Paul Michael Koch, son of Leo and Pauline (Schulte) Koch was born on March 14, 1935 in Panama, Iowa. He was baptized and confirmed at St. Mary&#8217;s Catholic Church in Panama. He attended grade and high school at St. Mary&#8217;s School... View Obituary & Service Information

The family of Rev. Paul Koch created this Life Tributes page to make it easy to share your memories.

Send flowers to the Koch family.