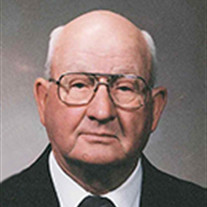 Orvie Emmet Christensen, age 99, was called home to be with his Lord on Friday, November 12, 2021 at the Hansen House in Harlan, Iowa. Orvie, the eldest son of Nels Ejnar and Martha Hansena (Hansen) Christensen, was born on January 4, 1922 in Clay Township, Shelby County, Iowa. He was the grandson of Danish immigrants Rasmus and Maren (Andersen) Hansen and Soren and Sophie (Nielsen) Christensen. Orvie was baptized in the Poplar Danish Church and began school at Polk #7. His family moved to Guthrie County where he continued school, and worked on various farms as a hired man. Orvie enlisted in the US Army in January, 1943 at Audubon and served with the Signal Corps as a member of the 9th Air Force Service Company which provided communications to General Patton’s troops in the drive across France. He landed on Omaha Beach shortly after D-Day in 1944 and was in Germany on VE Day in 1945. As a result of his service, he received Meritorious Unit Citation, a Presidential Citation and 4 battle stars. He was discharged in September, 1945. Orvie and Margaret Rose Darnell were married on December 13, 1945 in Atlantic, Iowa. They lived in Guthrie County where Orvie started his farming career. After 5 years, they moved to Shelby County, Jackson township, to the former Clover Leaf Stock Farm which had originally been owned by his grandfather, Rasmus Hansen. They would live there almost 70 years. He was a livestock farmer and at various times raised sheep, hogs, milked dairy cows and had cow/calf herd. He was an avid steward of God’s land and implemented many conservation practices and techniques before those became common practice. They were long-time members of Bethlehem Lutheran Church of rural Harlan where their children were confirmed and Orvie served on the church council. Orvie served as director of Jackson #1 school and was also a board member of Elk-Horn Kimballton School. Upon retiring from farming, Orvie enjoyed gardening and caring for the lawn, restoring old tractors and machines and reading. The couple enjoyed entertaining visitors of all ages for meals and games of pitch. Their grandchildren were cherished visitors. Orvie had a gift of an accurate memory and could recite weather and events from the past and enjoyed telling stories about “olden times”. Orvie had a deep faith and read his Bible regularly, prayed and sang hymns. Orvie will be remembered as a devoted son, husband, father, grandfather and uncle. He was an intelligent, honest, generous and kind man, and quiet but friendly. Having been gone from home for so many years in the Army, he didn’t care to be away from home much, but did enjoy a trip to Arizona with his family to watch Amanda’s band perform, and venturing with Margaret to numerous cemeteries on her genealogy searches and new relatives and friends that his wife discovered through her searches. In 2020, Orvie and Margaret moved from the farm to Hansen House Assisted Living in Harlan. Orvie was preceded in death by his parents, parents-in-law George and Hester (Hewett) Darnell, son Michael Jon (1958-1977), brother Dale and Cliford, sisters-in-law Dorothy Benson and Mildred Hull, brothers-in-law Donald, Delbert, and Darrell Darnell. Left to cherish his memory are his wife Margaret of Harlan; children Kathlyn Janelle (Timothy) Hansen (b 1946) of Clarinda, Marilyn Mardelle Weddum (b 1948) of Atlantic, Evelyn Jean Madsen (b 1949) of Grimes, Orvie Lee “Toby”(b 1951) of Kimballton, Mark Eugene (Cindi) (b 1955) of Polk City, and Thomas Kevin (b 1956) of Kimballton. Also surviving are his sister Mary Johnson of Council Bluffs, and grandchildren Kristin Weddum, Todd (Shelli) Weddum, Bradley (Jenny) Madsen, Amanda (Justin) Fletcher, Luke (Heather) Hansen, Zach Redman, and Nikolas Christensen, as well as 10 great grandchildren and 1 great-great grandchild. Orvie was beloved to his family; he will be greatly missed. May God grant comfort to those who mourn.

Orvie Emmet Christensen, age 99, was called home to be with his Lord on Friday, November 12, 2021 at the Hansen House in Harlan, Iowa. Orvie, the eldest son of Nels Ejnar and Martha Hansena (Hansen) Christensen, was born on January 4, 1922... View Obituary & Service Information

The family of Orvie Emmet Christensen created this Life Tributes page to make it easy to share your memories.

Orvie Emmet Christensen, age 99, was called home to be with his...

Send flowers to the Christensen family.