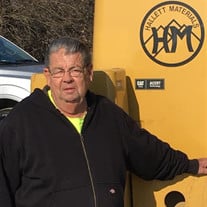 Norman E. ("Gene") Wiig was born to Margaret (Batten) and Norman M. Wiig on June 20th, 1945, in Harlan, Iowa. He was baptized and confirmed at St. Paul's Lutheran Church in Irwin, Iowa. He attended school and graduated from Irwin-Kirkman Community School in Irwin, Iowa. On April 15, 1964 Gene was united in marriage to Julienne Kaufman at St. Boniface Catholic Church in Westphalia, Iowa. To this union, one son, Rodney, was born. After their marriage, Gene farmed with his father and resided with his family on an acreage near Kirkman. During this time, Gene also bartended at the Chicken Hut in Harlan. In 1983 Gene accepted a position with G.A. Finley Sand and Gravel Pit. In 1989, Hallett Materials acquired G.A. Finley and he worked there until his retirement in December 2018. He spent his entire career with Hallett's loading trucks at the Harlan Sand Pit where he became known as "Sandman". He had a regular group that would stop in for coffee and his customers were sad to hear he was retiring. Gene loved to tell jokes and had a great sense of humor but he was most widely known for his bartering skills. He was always bartering to acquire another hat, another T-Shirt, or another coffee cup. Funny thing is, you never saw him wear the cap or shirt, or use the cups. He had a passion for gardening. Gene and Julie enjoyed working in their gardens and in the greenhouses. He continually created new flower beds throughout their acreage. His biggest passion was planting unique trees, shrubs, and flowers throughout. While wintering in Phoenix, they would be found at local nurseries trying to find unique plants to take back to Iowa. Gene died August 15th, 2019 at Jennie Edmundson Hospital in Council Bluffs, Iowa, at the age of 74. He is preceded in death by his father Norman M. Wiig and younger brother Terry Wiig. He is survived by his wife Julienne of Kirkman, Iowa and son Rodney of Peoria, Arizona. Also his mother Margaret Wiig of Harlan, Iowa, brother Larry Wiig of Council Bluffs, Iowa and sister Cathy (Gene Cavenaugh) of Harlan, Iowa. Many in-laws, nieces and nephews, and several friends.

Norman E. ("Gene") Wiig was born to Margaret (Batten) and Norman M. Wiig on June 20th, 1945, in Harlan, Iowa. He was baptized and confirmed at St. Paul's Lutheran Church in Irwin, Iowa. He attended school and graduated from Irwin-Kirkman... View Obituary & Service Information

The family of Norman "Gene" Wiig created this Life Tributes page to make it easy to share your memories.

Send flowers to the Wiig family.