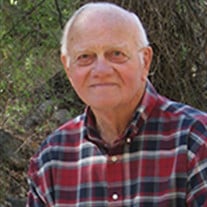 Norman Mathiasen, son of Edward, Sr. and Hannah (Greve) Mathiasen was born March 7, 1930 in Harlan, Iowa. He attended Windy Knoll Country School through 8th grade and was the first in his family to graduate from high school, as a member of the class of 1949. The Mathiasen siblings drove an old Willys Jeep to and from school, often picking up neighbors along the way. It makes us smile to think that perhaps Dad and his brothers are once again enjoying adventures in their old jeep. After high school, Norman proudly served at Craig Air Force Base in Selma, Alabama from 1950 to 1954 as an Air Force Policeman. He qualified for pilot training, but his commanding officer had already noticed his strong presence and requested that he serve in the states by his side. With an honorable discharge, he returned home to farm, eventually farming the family homestead until his retirement in 1995. Norm was very active in his community and church. He enjoyed serving on the School Board, County Board of Supervisors, Farmers Mutual Insurance Board, and various church committees. He made many treasured friendships during those years while helping to make his community a better place for all and becoming well known as the gentle giant. On September 3, 1955, Norman and Joanne Nancy Christensen were united in marriage at Bethel Baptist Church in Harlan. Four children were born to this union: Marcy, Scott, Nancy, and Edie. As a father and husband, he was always "steady and faithful," ready with a plan for what needed done today and what could wait for a “rainy Thursday”. As grandchildren came along grandpa and grandma continued to shower love on their family by hosting frequent sleepovers, campfires, and making many cherished memories on the farm. After retirement, Norm and Jo began enjoying their winters in Apache Junction, Arizona, making many new friends. He continued his love of woodworking, by learning the skill of carving and making many works of art for others. During their summer months in Harlan Norm enjoyed daily coffee, gathered around the table with many good friends. His legacy lives on in his love for the land and in his love for family and friends through all the life lessons he shared. Norm died peacefully at his home in Harlan surrounded by his loving family on Thursday, August 12, 2021, attaining the age of ninety-one years, five months and five days. In addition to his parents, he was preceded in death by his brothers Edward, Robert, and Howard. He is survived by his loving wife of 65 years Joanne Mathiasen of Harlan, Iowa; children Marcy (Mike) Cain of Harlan, Iowa and their children Nathan (Leah) Muell, Matthew (Jordan) Muell, Annie Muell, Becky Cain, and Carrie Cain (Troy); Scott (Mary) Mathiasen of Forest City, Iowa and their children Jonathan and Maggie; Nancy (David) Buman of Council Bluffs, Iowa and their children Andrew (Val) and Katie (Dan); Edie (Ken) Shetler of Harlan, Iowa and their children Levi (Amanda) and Ethan (Sarah); 19 great grandchildren; siblings Rosemary Petersen of Elk Horn, Iowa; Ann Wendt of Omaha, Nebraska; Ron Mathiasen of Harlan, Iowa; nieces and nephews; other family members and friends.

Norman Mathiasen, son of Edward, Sr. and Hannah (Greve) Mathiasen was born March 7, 1930 in Harlan, Iowa. He attended Windy Knoll Country School through 8th grade and was the first in his family to graduate from high school, as a member of... View Obituary & Service Information

The family of Norman Mathiasen created this Life Tributes page to make it easy to share your memories.

Send flowers to the Mathiasen family.