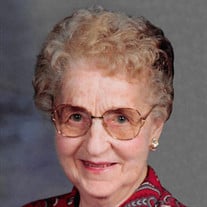 Norma Elizabeth Schmitz, the daughter of Mathias and Mary Frances (Baumann) Leuschen, was born on November 24, 1922 in Westphalia, Iowa. She was baptized and confirmed at St. Boniface Catholic Church in Westphalia. Norma graduated high school in 1940 from St. Boniface. On November 17, 1948, Norma married Francis "Frank" Schmitz at St. Boniface Catholic Church in Westphalia. He preceded her in death on October 21, 2005. Norma and Frank made their first home on a farm in Defiance, Iowa where they lived for two years farming together. In 1951, they moved to Dow City where they farmed for 28 years. Norma and Frank retired and moved to Denison in 1979. They became members of St. Rose of Lima Catholic Church. Norma was a member of the Altar Society. Norma enjoyed being a farm wife. She loved helping frank on the farm and taking care of the house they lived in and cooking. Norma always believed in eating. No matter how much the food cost, she always believed that you should have a full stomach. In her spare time, Norma enjoyed fishing, gardening, playing cards, and growing flowers. She kept things clean and precise. Norma was a good person to joke around with. She had a kind heart. She looked forward to Sundays when she would make phone calls to her brother-in-law, Don, and her nieces and nephews. Of course, she wouldn't want to visit too long as she would always have her mind set on doing something else. In 2017, Norma moved to Denison Care Center. She enjoyed playing bingo at the care center with other residents, especially the late Louis Poggensee. She also enjoyed the visits by her family and special friends, Juliana and Arlo Schwanz. On Friday, March 27, 2020 Norma passed away at Denison Care Center attaining the age of 97 years, 4 months, and 3 days. She was preceded in death by her parents; her husband Frank; siblings Ann Wilwerding, Joe Leuschen, Ruth Friedrichsen, and Roman Leuschen. Those left to cherish her memory include her brother-in-law Don Friedrichsen of Council Bluffs, Iowa; many nieces, nephews, and cousins; and very special friends Juliana and Arlo Schwanz of Denison.

The family of Norma Elizabeth Schmitz created this Life Tributes page to make it easy to share your memories.

Norma Elizabeth Schmitz, the daughter of Mathias and Mary Frances...