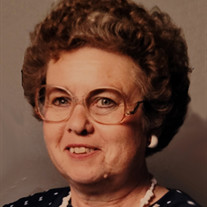 Neoma Ann Vanderheiden was born on August 29, 1930 to Elmer and Leora (Martens) Popp in Manning, IA. She was baptized and confirmed at Zion Lutheran Church in Manning. She attended school in Manning and graduated from Manning High School. On May 31, 1951, Neoma was united in marriage to John L. Vanderheiden at St. Lawrence Catholic Church in Carroll, IA. There were two sons born to this union: Rodney and Lindsey. John and Neoma moved to Harlan in 1959, and Neoma has lived in Harlan since that time. She was a key part of Van's Moving & Storage, Inc, a company that was founded in 1959, and existed for 34 years. During her tenure at the company, she was the Secretary/Treasurer and enjoyed working with Van's customers. For many years she would walk to and from work, getting the mail at the post office on the way. She was a member of St. Michael's Catholic Church since 1959. While at Elm Crest, she enjoyed visits from Father Frost and receiving Holy Communion from the church Eucharistic Ministers. She read the church bulletin to stay up with church happenings and watched St. Michael's mass on TV. Neoma loved her family very much and loved spending time with John and the two boys. In her earlier days, she enjoyed visiting with her mother, helping the boys with their homework, and attending their school and sports activities. When the boys were athletic trainers at Iowa State, she and John loved attending ISU Cyclone football games and spending weekends in Ames. She displayed a warm smile, had a casual sense of humor, and a calm demeanor. She didn't need to be the focal point of a conversation, but loved hearing what people had to say; she was an excellent listener. Neoma loved watching sports on TV, especially football, baseball, and basketball. She was an avid follower of the Harlan Community Cyclones, watching and listening to them on TV and radio. She had fun reminiscing about the glory days of Manning boys basketball that occurred during her high school years. Coached by C.W. Steneker, the Manning Bulldogs won the 1948 Boys Basketball State Championship, defeating Davenport in the finals. She also enjoyed reading the Harlan newspaper to keep up with the local news and sports. Some of her favorite TV shows included Lawrence Welk, Mollie B Polka Party, and Wheel of Fortune. She loved talking on the phone to her sons about a variety of topics. It was hard on her when John passed away in 2015, and then Rodney in 2017. She missed them tremendously and would talk about them often. She became a resident of Elm Crest Assisted Living in 2015, and passed away on December 31, 2020 at Myrtue Medical Center in Harlan, having attained the age of ninety years, four months, and two days. She was preceded in death by her husband of sixty-four years, John Vanderheiden; son Rodney, her parents, and sisters Betty Pittman (Virtus) and Gloria Cunconan. She is survived by her son Lindsey Vanderheiden and his wife, Stephanie of Longmont, CO; grandson, Jordan Vanderheiden of Broomfield, CO; and granddaughter, Michaela Vanderheiden of Colorado Springs, CO; sister, Janice Kolb (Larry) of North Hills, CA, many nieces and nephews, and other family and friends. In lieu of flowers family suggests memorials be made to the Harlan Cemetery Foundation.

Neoma Ann Vanderheiden was born on August 29, 1930 to Elmer and Leora (Martens) Popp in Manning, IA. She was baptized and confirmed at Zion Lutheran Church in Manning. She attended school in Manning and graduated from Manning High School.... View Obituary & Service Information

The family of Neoma Vanderheiden created this Life Tributes page to make it easy to share your memories.

Send flowers to the Vanderheiden family.