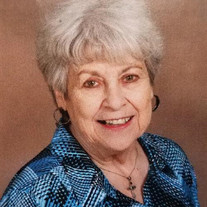 Monica Kathryn Wilke was born to Henry and Mary (Buckley) Schulte on October 16, 1937 in Panama, Iowa. She was baptized and confirmed at St. Mary’s Catholic Church in Panama. She attended and graduated from St. Mary’s Catholic School in Panama in 1955. After graduation, she worked at a bank in Omaha, Nebraska. In 1959, Monica was united in marriage to Robert Wilke from Earling, Iowa. To this union five children were born: Dean, Connie, Curt, Deanna, and Scott. In addition to raising her 5 children, Monica also had various jobs during her working career, including Variety Distributors, Inc., the State of Iowa, University of Nebraska Omaha, and Dr. Leo Ambrose, DDS. Monica was a life-long member of St. Mary’s Catholic Parish in Panama. She passed away on June 18, 2021 at Jennie Edmundson Hospital in Council Bluffs, Iowa, attaining the age of eighty-three years, eight months and two days. In addition to her parents, she was preceded in death by her husband Robert Wilke, siblings Alice McNerney, Joseph Schulte, and Henry Schulte, Jr. She is survived by her children Dean (Laurie) Wilke of Panama, Iowa; Connie Wilke of Neola, Iowa; Curt Wilke of Earling, Iowa; Deanna (Dan) Taylor of Runnells, Iowa; Scott (Susan) Wilke of Firestone, Colorado; 8 grandchildren; 7 great grandchildren; nieces and nephews; other family members and friends.

The family of Monica Kathyrn Wilke created this Life Tributes page to make it easy to share your memories.

Send flowers to the Wilke family.