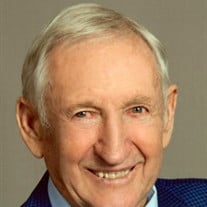 Milton J. Barry, son of Ransome and Gertrude (Smith) Barry, was born on September 10, 1932, on a farm outside of Woodbine, Iowa. When Milton was four, his family moved to a farm three miles west of Irwin. Milton became a member of the Irwin United Methodist Church. He attended school at Greeley #1 and then graduated from Irwin High School in 1950. Milton began his love for music at a young age. His abilities to sing and play the trumpet were admired by many. He enjoyed singing while his mother accompanied him. Milton began playing for the Earl Russell Orchestra as a senior, sang in the church choir, received numerous I ratings at music contests, and was a member of the All-State chorus. After graduation, Milton went to California where he worked at the Sears Warehouse and continued performing. During this time, Milton was able to sing with the famous Lawrence Welk. His time in California was cut short when he entered the Army. In 1953, Milton was stationed in Virginia. While he was there, a prestigious colonel heard the young soldier sing and requested a meeting with him. Milton then traded his uniform for a tuxedo. Milton performed at the Pentagon Playhouse, NCO, and officer clubs. Later, he was asked to go to Stuttgart, Germany with special army special services where his group travelled across Europe, performing in Germany, France, Austria, and Italy. He sang for a large number of distinguished dignitaries and visitors from foreign countries and performed with Jim Eddy and Frank Gorshin. While in high school, Milton was often accompanied by a beautiful pianist named Ruth Ann Nielsen. After returning from the military, the couple continued to share their love for music together. On July 10, 1955, the couple was married at the Evangelical United Brethren Church in Defiance and became parents to three daughters: Cyndi, Shelly, and Stacy. The couple settled on Milton's family farm where he farmed with his dad and had cattle then hogs. Milton thought it was very important to help young farmers, and he assisted many farmers in the area. He loved being outside where he could mow his yard, plant trees, and grow watermelon and pumpkins. As years went on, Milton and Ruth Ann continued using their musical talents around the state of Iowa. Milton continued to perform with the Earl Russell Orchestra at many ballrooms and dance halls as a trumpeter and singer for over thirty years. Milton and Ruth Ann travelled from town to town to play at more than 400 weddings, anniversaries, and funerals. Milton performed a self-written program entitled "What America Means to Me" with his wife, sister-in-law, and brother-in-law, which was given throughout the state of Iowa in 1976. Along with music, Milton served on the Farm Bureau Board, Pork Producers, Farm Service Co-op Board, and Tall Corn Ethanol Board. He was also a Worthy Patron for the Order of the Eastern Star. Milton had an infectious smile and loved to visit with people. He enjoyed drinking coffee or a cold Pepsi at the co-op or country store with area farmers. Milton had a love for all sports, especially when his grandchildren were participating. He was lovingly known as "Uncle Milty" by many of the Irwin-Kirkman and IKM athletes, which honored him as Fan of the Year several times. Milton loved to travel with his wife and life-long friends Bill and Louise Ahrenholtz. In addition to his parents, Milton is preceded in death by the love of his life Ruth Ann, brothers Owen and Dwayne, and sister Dorothy. Milton is survived by children Cyndi and her husband Tony Groshong of Cambridge, Nebraska; Shelly and her husband Lamont Christensen of Irwin, Iowa; Stacy and her husband Terry Rosonke of Norwalk, Iowa; six grandchildren; three great-grandchildren; sister-in-law Marie McLaughlin-Pearce and husband Clay of Harlan, Iowa; sister-in-law Nadine Nielsen of Hendersen, Nevada; nieces and nephews; other family members and many friends.

Milton J. Barry, son of Ransome and Gertrude (Smith) Barry, was born on September 10, 1932, on a farm outside of Woodbine, Iowa. When Milton was four, his family moved to a farm three miles west of Irwin. Milton became a member of the Irwin... View Obituary & Service Information

The family of Milton Barry created this Life Tributes page to make it easy to share your memories.