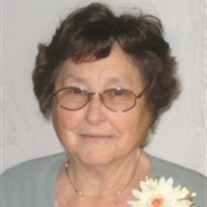 Mildred Ann Vandenberg, daughter of Joseph and Magdalen (Benes) Bohaty was born December 30, 1923. She grew up on a farm near David City, Nebraska during the hard times of the 1930's. She always said they were poor growing up but did not know it. She was the youngest of six children and was a real tomboy spending most of her time outdoors with her brother, Frank. Because the family farm was several miles from town, she stayed with a woman in town during her high school years and helped her before and after school. Mildred married Gale Vandenberg on May 13, 1941. After they were married, they farmed in the David City area. When Gale was drafted into the Army, they moved to Olympia, Washington. They returned back to the family farm in Nebraska when Gale was discharged from the Army in August, 1943. In 1946, Gale and Mildred took a chance and moved to Harlan, Iowa where Gale established Vandenberg Motors. The love of the farm life eventually presented an opportunity they could not pass up in 1958. They moved to the farm east of town where they would live out the rest of their lives. There they raised their children, along with chickens, hogs and stock and milk cows. Mildred usually was found somewhere in her large gardens, feeding animals or in her kitchen. She was known for her homemade bread, kolaches, cinnamon rolls, rohlicky and apple strudel. She did a lot of canning and was known for her dill pickles. The grandchildren even nicknamed her “Grandma Pickles”. She made a lot of clothes for her children and grandchildren when they were small even costumes for Halloween and plays. She was also a Cub and Girl Scout leader. Family was an integral part of her life as there was never a week that went by without at least one if not several visits from children and grandchildren. Christmas Eve was always spent at Grandma and Grandpa’s with “scratcher” soup and a visit from Santa Claus. Throughout her adult life, her Catholic faith was also very important to her never missing weekly mass or a holy day. The three most important things in her life were faith, family and farming. Mildred died on Tuesday, May 26, 2020 at her home in Harlan, attaining the age of ninety-six years, four months, and twenty-six days. In addition to her parents, she was preceded in death by her husband Gale, son James, son-in-law Kenny Kloewer, grandsons Jason Stinn and Gary Kloewer, siblings Margaret Semrad, Victor Bohaty, Rose Montague, Joseph Bohaty, and Frank Bohaty. She is survived by her children Mary Kloewer of Harlan; Joseph (Rosemary) Vandenberg of Kirkman; Allen (Diane) Vandenberg of Council Bluffs; Kathy (Lee) Stinn of Harlan; 15 grandchildren, 34 great grandchildren; 3 step great grandchildren; 3 great-great grandchildren; nieces and nephews; other family members and friends. An 11:00 AM Mass of Christian Burial was celebrated by Rev. John Frost on Saturday, June 6, 2020 at St. Michael’s Catholic Church in Harlan. James Kloewer, Joe Vandenberg, Eric Vandenberg, and Jerry Stinn served as honorary casket bearers. Gale Kloewer, Andrew Kloewer, Bill Vandenberg, Tommy Stinn, Paul Vandenberg, and Mike Vandenberg served as casket bearers. Interment was held at Harlan Cemetery in Harlan. Pauley Jones Funeral Home was in charge of arrangements. Family request memorials be made to: Shelby County Catholic School and St. Michael's Catholic Church.

Mildred Ann Vandenberg, daughter of Joseph and Magdalen (Benes) Bohaty was born December 30, 1923. She grew up on a farm near David City, Nebraska during the hard times of the 1930's. She always said they were poor growing up but did not know... View Obituary & Service Information

The family of Mildred Vandenberg created this Life Tributes page to make it easy to share your memories.

Send flowers to the Vandenberg family.