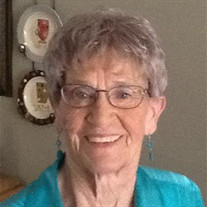 Mildred “Mick” Bieker, the daughter of Peter and Isabelle (Wilberding) Heese, was born July 7, 1929 at her home in Earling. She attended St. Joseph’s Catholic School, graduating with the class of 1947. On June 28, 1948, Mick married the love of her life, Leo Bieker at St. Joseph’s Catholic Church in Earling. To this union, 7 children were born: Mary, Terry, Jim, Cindy, Jack, June, and Mike. Mick had a busy life. She worked various jobs like the grocery store or Little Flower Haven, but ultimately she ran the Hardware Store that her and Leo owned. Not to mention raising 7 children must not have been easy. But Mick made it look easy. She never looked like she was mad or even got mad at people or even her kids. Well, until Jim decided to grill a steak in the oven at midnight one night, getting grease all over Mick’s freshly cleaned kitchen and oven. Mick got her payback though. She went outside and wiped mud all over Jim’s white Corvette. Mick liked to keep things clean, especially the kitchen where she loved to cook and bake. She was best known for baking huge rolls that were DE-LICIOUS. One year her granddaughters made a sign and put it in her front yard that read, “Grandma has the best buns!” When her kids were younger, their friends used to always ask, “what does your mom have for snacks for after school today?”. If you visited her, she would always have a bowl of Mick’s Mix ready to go. That was kinda her signature snack. It was like crack; once you stared eating it, you couldn’t stop. Mick also liked music and working on crossword puzzles. She had a big heart. She loved to help anyone who needed it and volunteer. She was always in a rush to go volunteer. She’d say, “gotta go. I have to make 10,000 meals to pack to go overseas.” Even when Mick was told she was old she worked hard because she could handle being called old, but don’t say “elderly”. Mick had a quick wit. Sometimes a little too quick as she would say after, “oh, why did I say that? I just couldn’t stop it from coming out.”. She had a great sense of humor, but she struggled with telling jokes; she always said the punch line before the actual joke, and then would try to go back to the beginning. A couple of weeks ago, her family gathered with her. In a circle, Mick looked around and said, “Girls, I want you all to promise me that we will always continue to laugh together, and we will laugh forever.”. On Thursday, January 9, 2020, Mick passed away at Myrtue Medical Center in Harlan with family by her side. At the time of her death, she attained the age of 90 years, 6 months, and 2 days. Mick was preceded in death by her parents; her husband Leo Biker; and her siblings Dorothy, Rita, Bernice, Isabelle, Eddy, Owen, Teri, Norma, and Larry. Those left to cherish her memory are her children Mary Fledderman and her husband Dale of Omaha, Nebraska; Terry Bieker and his wife Tec of Des Moines, Iowa; Jim Bieker and his wife Sharon of Harlan; Cindy Sommer and her husband Dan of Omaha, Nebraska; Jack Bieker and his wife Susie of Phoenix, Arizona; June Swiercek and her husband John of Omaha, Nebraska; and Mike Bieker and his wife Michelle of Fremont, Nebraska; 33 grandchildren; 58 great grandchildren; her sister, sister Liz Heese of Milwaukee, Wisconsin; sister-in-law Jean Heese of Cedar Rapids, Iowa; and several nieces nephews, cousins, and friends.

The family of Mildred "Mick" Bieker created this Life Tributes page to make it easy to share your memories.

Mildred “Mick” Bieker, the daughter of Peter and Isabelle (Wilberding)...