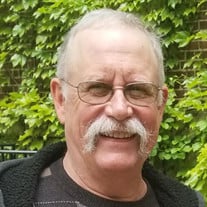 Mike Miller, Prescott IA Mike Miller (born Donald Michael Miller), son of Donald and Marietta (Kobold) Miller, was born on October 4,1950 in Harlan, IA. He attended school in Harlan and enlisted in the Army thereafter where he served in Germany. Upon completion of his duty, he relocated to Los Angeles, CA and attended trade school for engineering. During his early years, he worked in residential home construction in Los Angeles and Denver, CO, which he really enjoyed. On September 22, 1980, Mike married the love of his life, Deborah Kay Stendrup in Greeley, CO. Their daughter, Laura, was born into this union in 1982, joining Debbie’s two daughters, Jill and Amy. Shortly after their wedding, Mike and Debbie moved to Prescott, Iowa, where they made their home. Mike worked within the casting manufacturing area of Fansteel Wellman Dynamics before beginning his long career with the United States Postal Service, serving as postal carrier in Harlan, IA before transferring to Creston, IA. He continued with USPS through 2008, at which time he took his leave in order to dedicate himself to the care for his wife, Debbie. When Mike wasn’t working, he enjoyed being outdoors as much as possible, spending countless hours gardening, maintaining his pasture of trees, and spending quality time with his family, with the occasional drive to the local fishing hole. He supported several major causes, including Iowa Citizens for Community Improvement (CCI), for which he was an active member. For those that knew him best, they know of his kind heart, willingness to do anything or help anyone in need, tireless work ethic, goofy sense of humor and witty writings to friends and editors, his great appreciation of nature which included countless photographs of clouds and sunsets for which Mike always observed unique beauty, his love of receiving post cards from the adventures of friends and family, as well as the self-established tradition of extending “good luck bucks” to those closest to him in order to put a smile on someone’s face. Mike passed away on Tuesday, April 14th, 2020 at MercyOne Medical Center in Des Moines, IA having attained the age of sixty-nine years, six months, and ten days. He is preceded in death by his parents and his loving wife, Debbie Miller. He is survived by his children: Laura Miller and her partner Peter Szefler of Watertown, MA, Jill and her husband Rob Mackey of Altoona, IA; Amy and her husband Craig Crilly of Grimes, IA; his four grandchildren Jordan Mackey, Jazmine, Jonah, and Jack Crilly; his brother David Miller and his wife Donita of Harlan, his faithful dog Lucky, and many other family members and friends. Funeral Services have not been scheduled and are currently pending.

The family of Mike Miller created this Life Tributes page to make it easy to share your memories.