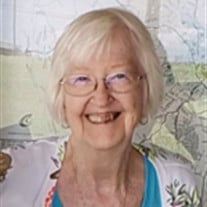 Our mom was a vibrant, loving, extraordinary woman. Born Mickalia Ann Williams, daughter of Otto and Inez (Merritt) Nelson, on May 27, 1938 in Denver, Colorado. She graduated from Harlan High School with the class of 1956. After graduation, she enlisted in the United States Air Force, where she served her country honorably. She was married and returned to Harlan, Iowa to raise her children. She accepted Jesus Christ as her personal Savior on April 26, 1962 and considered this her Christian birthday. She joined Bethel Baptist Church where she was active in the choir and many Bible studies, giving her children a firm foundation. In 1975, she was united in marriage to Clifford Williams and together they raised a blended family. Mickey worked as a bookkeeper throughout her life, both as a career and in the many organizations she was involved in. Mickey and Cliff were members of various Veteran and community organizations, holding several officer positions throughout their lifetimes. Mickey was active in AMVETS, VFW Auxiliary, American Legion Auxiliary, FEMVETS, Air Force Sergeants Association, DAV Auxiliary and Iowa Department of Veterans Affairs. She was the first woman elected Department Commander for the Iowa AMVETS and was nominated by the governor to serve on the Iowa Veterans Commission. She served on the Shelby County Historical Society board, Shelby County Veterans Affairs Commission and Harlan Cemetery Association board. Mickey had a passion for life. She enjoyed reading, traveling, gardening, crafting and watching football, especially the Green Bay Packers. Nothing gave her more pleasure than sharing a meal or a cup of coffee while enjoying conversations and laughter with family and friends. These are the times we will miss the most. Mickey passed peacefully to her eternal home on Saturday, January 16, 2021 at Methodist Hospital in Omaha, Nebraska. In addition to her parents, she was preceded in death by her husband Cliff, sister Mary Glihsmann, son Lanny Williams, daughters Jura Meyers and Kelly Williams, grandchildren Matthew Nelson, Chastity Williams and Joshua Williams. She is survived by her children Greg Semrau of Lake Mills, Iowa; Michelle (Denny) Reis of Genoa, Nebraska; Patricia (Jon) Barthelman of Lincoln, Nebraska; Christie Semrau of Omaha, Nebraska; niece LeaAnne Koppen and brother-in-law James Glihsmann both of Arizona; grandchildren Melissa Bremer, Joshua Semrau, Nicole Sokolofsky, Dalton Petty, Cordell Barthelman, Justin Williams, Shawn Williams and fiancée Megan McGuire, Tina Mercado, Nicole Haire, Johnny Myers, Lana Moser, Joel Williams and Rachel Williams; many great grandchildren and great-great grandchildren; and so many friends.

Our mom was a vibrant, loving, extraordinary woman. Born Mickalia Ann Williams, daughter of Otto and Inez (Merritt) Nelson, on May 27, 1938 in Denver, Colorado. She graduated from Harlan High School with the class of 1956. After graduation,... View Obituary & Service Information

The family of Mickalia "Mickey" Ann Williams created this Life Tributes page to make it easy to share your memories.

Our mom was a vibrant, loving, extraordinary woman. Born Mickalia...

Send flowers to the Williams family.