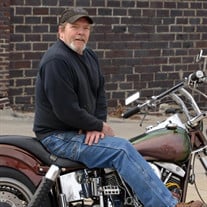 No Services At This Time Please direct memorials to: Wohlhutter Family PO Box 29 Kimballton, IA 51543. Donations will be made in Mike’s memory to the Lung Transplant Program at UNMC Michael David Wohlhutter, son of Bernard Lee and Dolores Annette (Stolz) Wohlhutter was born September 1, 1953 in Charleston, South Carolina. He attended Irwin-Kirkman Schools when he wasn’t busy sneaking off to hide in the orchard on their Kirkman farm. After high school, he enlisted into the US Navy serving his country honorably for a short time. On April 1, 1972, Mike was united in marriage to Patricia Ann Jensen at the United Methodist Church in Harlan, Iowa. Together the couple raised three children: Angela Louise, Melanie Jean, and Michael David II. Mike started his manufacturing talents with Bond Equipment in Logan, Iowa, designing equipment used in packing plants. His designs hold U.S. Patents. Mike worked at Avoca Implement as a mechanic and restoring tractors for Jerry Mez, which later he helped at the Farmall Museum. He decided to start his own business, Metal Ink, repairing and fabricating motorcycles. It didn't take long after opening the doors for farmers to find Mike and once again he was working on Ag equipment as well. A jack of all trades, Mike was known to be straight forward and honest with those around him, and was never shy when it came to telling you what he thought. Over the years his combined talents and attitude earned him the official Bad-ass Mo-Fo title. Mike loved his community and wanted to bring more people to town while sparking interest into the motorcycle culture as well, he was the man behind Roar into Harlan for almost a decade. He always enjoyed working with metal and found he could create or fix anything. His wrought iron work can be seen around town. When he wasn’t fixing or fabricating, if you were lucky enough to catch him, Mike played a mean guitar, and had an amazing singing voice. Sundays were for his family. He loved spending time with them and he always made the best dinners. Always proud of his grandchildren, he had an intense love for family and that included his donor, Hunter, whom was considered the most gracious blessing the Wohlhutter family ever received. Mike died on Monday, December 6, 2021 surrounded by his loving family at his home, attaining the age of sixty-eight years, three months, and five days. In addition to his parents, he was preceded in death by his daughter Angela and sister Mary Elizabeth Wohlhutter. He is survived by his wife, Pat Wohlhutter of Harlan, Iowa; children Melanie (Vernon) Schwarte of Kimballton, Iowa; Mike (Danielle) Wohlhutter of Harlan, Iowa; grandchildren Sabin Henery, Soren Henery, Violet Schaecher, Rylie Wohlhutter, McKenna Wohlhutter, Michael Wohlhutter III, Kelsey Crawford, and Jenna McDaniel; great grandchildren Myla Crawford, Ronin Crawford, Hunter Betances, and Aubree Betances; other family members and too many friends to count.

No Services At This Time Please direct memorials to: Wohlhutter Family PO Box 29 Kimballton, IA 51543. Donations will be made in Mike&#8217;s memory to the Lung Transplant Program at UNMC Michael David Wohlhutter, son of Bernard Lee and Dolores... View Obituary & Service Information

The family of Michael David Wohlhutter created this Life Tributes page to make it easy to share your memories.

No Services At This Time

Send flowers to the Wohlhutter family.