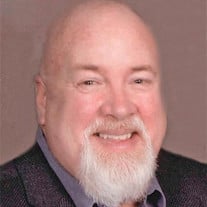 Michael James Hope, son of Thomas A. and Mary Jean (Minar) Hope, was born on September 13, 1956 in Omaha, Nebraska. He was baptized on September 30, 1956 at St. Margaret Mary’s Catholic Church in Omaha, Nebraska. He began elementary school at Holy Cross, for kindergarten, then went to Prairie Lane Elementary School. He attended Valley View Junior High School and Omaha Westside High school, graduating with the class of 1974. Growing up with his brothers they held a paper route, stocked shelves at Food City, mowed lawns and shoveled sidewalks. Mike loved playing pick-up sports such as baseball, basketball and football with other neighborhood children. After high school, he went to work at Robert's Dairy in Omaha where he was a route salesman for 32 years until his retirement in 2007. Throughout those 32 years at the dairy, he accumulated many close relationships and friendships that he maintained after retirement. Mike met the love of his life Rhonda Reisch in February 1979 at a dance in Council Bluffs, Iowa where Murphy's Law was performing. They were united in marriage on July 30, 1982 at St. Mary's Catholic Church in Avoca, Iowa, which was officiated by Father Paul Monahan. To this 37 year union, three children were born: Chantelle Renee, Nicholas Michael and Chondra Rae. One of Mike's favorite passions was watching and/or following all three of his children participating in multiple extracurricular activities including dancing, piano recitals, Boy Scouting, and sporting events. After retirement Mike worked for Agriland Farm Service in Avoca during the planting and harvesting seasons, Doyle Gilland Trucking and Gramco LLC. He started his own business - MJ Hope Enterprises, LLC - a mowing service working in and throughout Avoca and Council Bluffs. Also in his retirement, Mike had more time to pursue his passion of grilling and smoking meats for his family, his friends and community wide events. Mike's life was full of entertainment, family and faith. He was an active charter member of Knights of Columbus Council #12133 in Avoca earning the coveted rank of 4th Degree. As a brother Knight, he helped organize fish fry's during Lent, Mother's Day and Super Bowl breakfasts, Tootsie Roll Drives, the annual golf tournament and other raffles all raising money for the needy and outcast. Mike attended many Breeders Cup horse race events held in places such as California, Texas, Kentucky, Chicago and New York and made numerous trips to Las Vegas with some of his close buddies. He also enjoyed spring training baseball games in Arizona and Florida. Over the years, Mike had taken many fishing trips with friends and family to Canada, Minnesota, South Dakota and Missouri as well as going on two Boundary Water canoe trips with his son Nick and Scout Troop 97. His beloved Nebraska Cornhuskers and St. Louis Cardinals were his favorite teams to follow and cheer for at all times. Some of Mike's most cherished moments were with his wife Rhonda by his side. They enjoyed a trip to New York City for their 25th wedding anniversary to see Bruce Springsteen perform at an outdoor concert at the old Meadowlands. They loved the Gulf Shores in Alabama and Florida, sightseeing in Nashville, touring the Grand Canyon and even experiencing zip-lining in the rain forest of Costa Rica. Mike and Rhonda liked taking short weekend getaways around Iowa in their convertible. Mike was always up for whatever Rhonda wanted to do, which sometimes included taking ballroom dance classes, attending wine tastings, murder mystery dinners or even a quiet night together at the movies. Mike was a strong man of faith and was most proud of being a Godfather and Confirmation sponsor to several friend's children. His garage was always open to many of his buddies for camaraderie and watching "the game" on T.V. all year round. Mike passed away on October 18, 2019 having attained the age of sixty-three years, one month and five days. He was preceded in death by his father Thomas A. Hope and brother Robert Hope. He is survived by his loving wife of 37 years Rhonda Hope of Avoca, Iowa; his children Chantelle (fiancé Justin Harre) Hope of Council Bluffs, Iowa; Nicholas Hope of Avoca, Iowa; Chondra Hope of Council Bluffs, Iowa; mother Mary Jean Hope of Omaha, Nebraska; siblings Tamasine (Radley) Clemens of Omaha, Nebraska; Thomas Hope of Omaha, Nebraska; Steve (Katy) Hope of Omaha, Nebraska; Richard Hope of Blair, Nebraska; many nieces and nephews, other family and many, many friends. A 10:30 AM Mass of Christian Burial was held on Friday, October 25, 2019 at St. Mary’s Catholic Church in Avoca with Celebrants Fr. Seth Owusu, Fr. John Frost and Fr. Paul Monahan officiating. Honorary casket bearers were Roger Benson, Bill Bylund, Dan Hope, Bob Fields, Dave Robinson, Todd Pauley, Mark Wise and Mark Campbell. Dennis Martin, Tony Denning, Larry Petersen, Frank Nelsen, Matt Gramkow, Dylan Robinson, Derek Knop, Jerry McCarthy, Dave Larson and Bob McCarthy served as active casket bearers. Interment was held at Graceland Cemetery in Avoca, Iowa. Pauley Jones Funeral Home in Avoca was in charge of arrangements.

The family of Michael "Mike" James Hope created this Life Tributes page to make it easy to share your memories.

Send flowers to the Hope family.