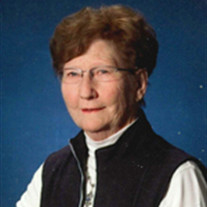 Mary Ellen Rosalita Reisz, daughter of Flora Stinn and Michael D. Leinen, was born on October 19, 1931. She was baptized and confirmed at Our Lady of Fatima Church in Portsmouth. She attended St. Mary's Elementary and High School in Portsmouth and graduated from high school in 1949. On October 18, 1951, she married Walter John Reisz at Our Lady of Fatima Church. After her marriage to Walter, Mary Ellen worked for the Council Bluffs Nonpareil in the ad department. After their move back to Portsmouth, they owned and operated a grocery store. Mary Ellen also worked at Leadway in Shelby. She loved gardening, taking care of her plants, flowers, sewing, quilting, cooking, baking and singing in the church choir. She also enjoyed listening to her favorite singer Daniel O' Donnell, whether on CD, television or several times in concert. Mary Ellen most enjoyed spending time with her family and cherished her children, grandchildren and great grandchildren. She loved to spend time at her cabin in Minnesota on Ten Mile Lake, where she had vacationed with her family since 1955. She had a quick wit and great sense of humor to the delight of her family. She enjoyed spending time with her regular coffee group of friends. One of Mary Ellen's greatest honors was attending a Mass celebrated by St. John Paul II. She was the a "member" of the Four Roses, who were best of friends in school and throughout their lives. The other members of the Four Roses included Rose Ann Schnuettgen, Rosa Lee Byrnes and Barbara Rose Heller, all of whom preceded her in death. Mary Ellen joined the Catholic Daughters of the Americas on March 13, 1955, at the Court of St. Katherine's in Earling. She transferred her membership to the newly formed Maria Goretti Court number 2498 in Portsmouth on May 5th, 2002. She was honored to serve as a Regent from 2006 to 2008. Mary Ellen was preceded in death by her parents Flora and Michael D. Leinen, her husband Walter John Reisz, daughter Carol Musich and son-in-law Randy Musich, her sisters Luella Hendricks, Rita Stein, Arlene Reinig, Cleo Lefeber, brothers Arthur Leinen, Marcus Leinen and Robert Leinen. Mary Ellen is survived by her children: Joan (Keith) Potter of Harlan, IA, Philip Reisz of Portsmouth, IA, Peggy Patten of Storm Lake, IA, John (Patricia) Reisz of Bellevue, NE, 11 grandchildren and 6 great grandchildren, one sister Lois (Duane) Book of Fort Lupton, CO, and 2 sisters-in-law, Connie Leinen of Persia, IA and Rita Reisz of Panama, IA.

Mary Ellen Rosalita Reisz, daughter of Flora Stinn and Michael D. Leinen, was born on October 19, 1931. She was baptized and confirmed at Our Lady of Fatima Church in Portsmouth. She attended St. Mary's Elementary and High School in Portsmouth... View Obituary & Service Information

The family of Mary Ellen Reisz created this Life Tributes page to make it easy to share your memories.

Send flowers to the Reisz family.