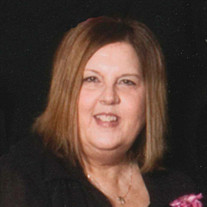 Mary Ellen Nordby, daughter of Norman and Bette Jean (Heilesen) Sorenson, was born November 13, 1948 at her family home in Harlan, Iowa. She was baptized and confirmed at First United Methodist Church in Harlan, Iowa. She attended Laurel Elementary School and Harlan High School, both in Harlan, Iowa. She then attended Stewart School of Hair in Council Bluffs, Iowa becoming a licensed cosmetologist. On August 15, 1971, Mary was united in marriage to Dwain Nordby at First United Methodist in Harlan. Four sons were born to this union: Rodney, Jonathan, Wendell and Dustin. Mary worked as a beautician until retiring in 2011. From the age of three, Mary enjoyed taking trips to Lake Okoboji, where she found a love for collecting lighthouses. She also enjoyed painting baby dolls and collecting Precious Moments figurines. She loved all holidays and time spent with her friends and family. She was a loving wife, mother and grandmother. Mary died on Tuesday, June 18, 2019 at Little Flower Haven in Earling, Iowa, attaining the age of seventy years, seven months and five days. In addition to her parents, she was preceded in death by her sister Linda Kochel. She is survived by her husband Dwain Nordby of Irwin, Iowa; sons Rodney Nordby of Atlantic, Iowa; Jonathan Nordby of Ames, Iowa; Wendell Nordby of Irwin, Iowa; Dustin Nordby and his wife Courtney of Harlan, Iowa; six grandchildren; brother Carl Sorenson and his wife Cindy of Apopka, Florida; nieces and nephews; other family members and many friends.

The family of Mary Ellen Nordby created this Life Tributes page to make it easy to share your memories.

Send flowers to the Nordby family.