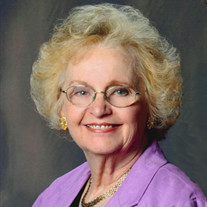 Mary Elizabeth (Chapman) Nichols, daughter of William and Pauline (Lane) Chapman was born on March 22nd, 1941 in Prescott, Iowa. She graduated high school from Cromwell, Iowa in the class of 1958 where Mary was chosen as the homecoming queen. Following high school, Mary worked in Creston honing her secretarial and bookkeeping skills while also participating in various community theatre productions where she met her future husband Stanley Nichols in late 1960. Stan and Mary married on May 7th, 1961 making their first home in Cherokee, Iowa where Mary provided secretarial support at the mental hospital. Their daughters, Linda and Lisa were both born in Cherokee, before the family moved to Des Moines. While in Des Moines, Mary worked at Hy-Vee as a bookkeeper and their first son, Steven was born. Stan and Mary then made their way to a farm outside of Creston, Iowa, about ¼ mile from Mary's parents. As family was always her priority, Mary relished having her mother close by as a support to her as she worked in Corning. After a short stint on the farm, the family moved into Creston and subsequently to Harlan, Iowa in 1977, where their youngest son, Michael was born. Mary held a variety of jobs during these early years in Harlan, and often more than one job at a time to help support the family. Eventually, Mary started working for CDS (Communications Data Services) where she remained until she retired in 2006. Through the years, Mary was involved with the Eastern Star organization and the Congregational United Church of Christ in Harlan, but the majority of her life was focused on raising and providing for her family. Mary was a private person who was intensely devoted to her children. She loved music, animals, and many of the simple pleasures of life. She also relished extending her motherly role to her children's friends. Mary also had an infectious laugh that would automatically make others smile. Mary died on Tuesday January 12th at the Salem Lutheran Nursing Home in Elk Horn, Iowa after a long battle with Alzheimer's disease having attained the age of 79 years 9 months and 20 days. In addition to her parents, Mary was preceded in death by her husband Stan, her son Steven, and her sister in law Betty (Blazek) Chapman. Mary is survived by her daughter Linda (Robert) Holst of Omaha, Nebraska, Lisa Nichols of Jacksonville, Florida, Michael (Anita) Nichols of Harlan, and daughter in law, Toni (Steven) Nichols of Elkhorn, Nebraska; 10 grandchildren, 11 great grandchildren; brother William Chapman, Jr. of Creston, Iowa; nieces and nephews, other relatives, and friends.

Mary Elizabeth (Chapman) Nichols, daughter of William and Pauline (Lane) Chapman was born on March 22nd, 1941 in Prescott, Iowa. She graduated high school from Cromwell, Iowa in the class of 1958 where Mary was chosen as the homecoming queen.... View Obituary & Service Information

The family of Mary Nichols created this Life Tributes page to make it easy to share your memories.

Send flowers to the Nichols family.