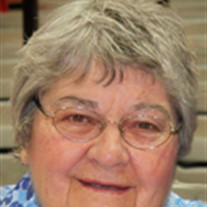 MaryBeth was born November 6, 1942 in Charleston, South Carolina, to shipwright Fletcher J Boggess, and hairdresser Alberta Blanch Boggess. She met her devilishly handsome husband in the sixth grade –but they only began dating toward the end of their senior year. Bill and Mary Beth married on June 15, 1963 and they built a life together creating what they refer to as their “planned parenthood” of five children. Early on, they played bridge and enjoyed Friday nights at Shakie’s for pizza, as well as monthly gatherings with nursing friends. Bill and Marybeth's favorite places were Pensacola Beach and the Donut Mill in Woodland Park, CO (Bill continued to bring “snerfie” her a donut every day at the nursing home, hospital or home). MaryBeth graduated from Immanuel Lutheran Nursing School in August 1963, specializing in OB/GYN. To her, birth was a miracle that she got to witness daily. She worked as an obstetrical nurse in Nebraska, Florida and Colorado, retiring in 2012 in Colorado Springs. Her knowledgeable and empathetic care was cherished by every patient she touched. MaryBeth directed a number of cross country journeys in the Campbell station wagon, pre-seatbelts or AC, with children and household animals. These journeys created indelible memories in the collective Campbell clan memory. With each move, MaryBeth and Bill made new friends, many becoming life-long members of the extended Campbell family. Being only children themselves, MaryBeth and Bill enjoyed having gained warm adoptive aunts and uncles for their children. MaryBeth (aka YiaYia), came out of her “semi-retirement” to provide care all 10 of her grandchildren with the kind of love only a grandmother can provide. She always told her children this gift was their inheritance. The grandchildren were a portion of her pride and joy, and they never went to time out! Her love blossomed into a special relationship with each individual grandchild that will be etched in their memory forever. MaryBeth’s religious faith sustained her through life’s peaks and valleys. Her calling led to her conversion to Roman Catholicism in the early 70s, despite strong opposition from her family and friends. She passed this faith along to her husband and children in her every act. She did as the Good Lord explained in the Gospel of Mathew, building up treasures in heaven by giving of herself to others. The family will miss her immensely but have comfort knowing that she is with Kasey and our Eternal Father. We are all grateful she will have no more pain and everlasting peace and happiness. “love you more Mom”

MaryBeth was born November 6, 1942 in Charleston, South Carolina, to shipwright Fletcher J Boggess, and hairdresser Alberta Blanch Boggess. She met her devilishly handsome husband in the sixth grade &#8211;but they only began dating toward the... View Obituary & Service Information

The family of Mary Beth Campbell created this Life Tributes page to make it easy to share your memories.

Send flowers to the Campbell family.