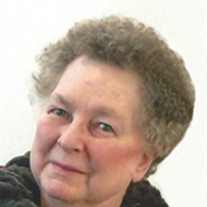 Mary Ann Assmann was born August 14, 1932, at home in Portsmouth, Iowa. She is the daughter of Henry and Mary (Katzer) Thraen. She was baptized in the St. Mary Our Lady of Fatima Catholic Church in Portsmouth. In high school Mary Ann acquired the nickname Blonde. She graduated from St. Joseph’s Catholic School in 1950. On September 6, 1954, she was united in marriage to Michael Albert Assmann at the St. Joseph’s Catholic Church in Earling, Iowa. To this union, nine children were born; Helen, Linda, Thomas, Susan, William, Carol, Jane, Robert, and Keith. Mary Ann and Michael made their home in Earling on a farm. Mary Ann had many interests including crafts, sewing, gardening, canning, quilting, and raising nine children. She was an amazing seamstress, making clothing for the entire family as well as clothes for our dolls and Barbies. The children remember many evenings watching their parents sitting on the front steps. Many evenings on the farm were spent eating popcorn and apples in the front yard. If we weren’t doing this, we were having ice cream cones dipped by Dad’s skilled levels with a butter knife or we were having malts. Throughout the years, all of us were sitting on those steps podding peas or cutting green beans. Mary Ann and Mike had a ritual of reading the “Family Circus” cartoon from the newspaper each morning. They always had a smile on their faces as they shared the cartoon! Mary Ann and Mike also enjoyed dancing and bowling as time allowed. In 2007, Mary Ann and Mike sold their farm and moved to Harlan where they lived. In 2016, they moved to Clarinda to be near their daughter Susan. Left to cherish the memory of a wonderful mother and grandmother are her nine children, Helen Johnson and husband Wayne of Nevada, Iowa; Linda Wilson and husband Jerry of Pickerington, Ohio; Thomas Assmann of Bettendorf, Iowa; Susan Bond and husband Terry of Clarinda, Iowa; William Assmann and wife Carol of Chevy Chase, Maryland; Carol Anderson and Greg Hoff of Tulsa, Oklahoma; Jane Scudder and husband Michael of Peculiar, Missouri; Robert Assmann and wife Ginger of Ankeny, Iowa; and Keith Assmann and wife Nicole of Colorado Springs, CO; nineteen grandhcildren, twenty-eight great grandchildren; brother Mark Thraen and his wife Priscilla of Earling, Iowa; along with many other relatives and friends. Preceding Mary Ann in death are her parents, Henry and Mary Thraen; and her husband Mike Assmann. Mary Ann was a wonderful wife, mother, grandmother, and homemaker. The family will cherish the memories of sitting on the front steps, whether relaxing or podding peas and/or cutting green beans! May she be at peace in God’s loving care. In lieu of flowers family suggests memorials be made in Mary Ann's name.

Mary Ann Assmann was born August 14, 1932, at home in Portsmouth, Iowa. She is the daughter of Henry and Mary (Katzer) Thraen. She was baptized in the St. Mary Our Lady of Fatima Catholic Church in Portsmouth. In high school Mary Ann acquired... View Obituary & Service Information

The family of Mary Ann Assmann created this Life Tributes page to make it easy to share your memories.

Send flowers to the Assmann family.