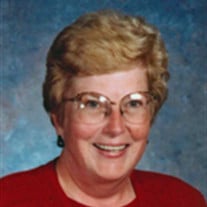 Mary Kathryn Ahrenholtz, daughter of Wyllis and Cecil (Cade) Walker was born September 28, 1942 in Denison, Iowa. She was baptized and confirmed at the First United Methodist Church in Denison. She attended Denison High School, graduating with the class of 1960. Mary's passion for learning started in high school; then led her through Midwestern College with a BS in Education, Morningside College with a Masters in Education and Special Education; onto the University of South Dakota for her Specialists degree in School Pyschology, finishing with her certification for School Administrators at Drake University. She retired from education to Clive, Iowa in 2010. Mary was a determined and self-driven person when it came to accomplishing her goals. While being quiet and reserved by nature, she could also be tenacious, even when researching her own Parkinson's illness. She enjoyed belonging to special groups, such as membership in the Retired Teacher's Association of Iowa. Earlier in her life she was a member of Eastern Star and the Daughters of the American Revolution. She enjoyed crafting, needlework, and knitting in her spare time. She also enjoyed shopping for just the right little gift for her special little ones. Mary was blessed with two children from her marriage of 20 years to Albert Roundy. On July 1, 1983, she was married to Galen Ahrenholtz at the United Methodist Church in Harlan, Iowa. Having moved around in her younger years, she settled and lived in Denison and Harlan with her family and many friends. In April of 2019, Mary moved to Edencrest at Beaverdale in Des Moines, Iowa, where she died on Sunday, November 22, 2020, attaining the age of seventy-eight years, one month and twenty-five days. She was preceded in death by her parents and step-son Kevin Ahrenholtz. She is survived by her husband of 37 years Galen Ahrenholtz of Clive, Iowa; children Andrea (Patrick) Hays of Austin, Texas; Ronald (Julie) Roundy of Sacramento, California; stepchildren Kent (Teresa) Ahrenholtz of Evansville, Indiana; Kathleen (Rob) Gipperich of St. Louis, Missouri; Kareen (Denny) Bruck of Johnston, Iowa; grandchildren Erin, Kaitlin, and Jaxson; great grandchildren Sophia, Evelyn, Jensen, Graham, Arlo; 7 step grandchildren; 2 step great-grandchildren. In lieu of flowers family suggests memorial be made to Harlan Community High School Education Scholarship. Masks and Social Distancing are required during visitation hours.

The family of Mary Kathryn Ahrenholtz created this Life Tributes page to make it easy to share your memories.

Send flowers to the Ahrenholtz family.