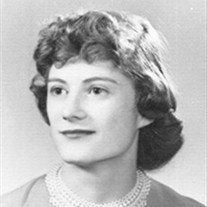 Marna Lou Lott was born on February 11, 1940, in Lytton, Iowa in her family farmhouse. As a baby, Marna was baptized in her family home by the Lutheran minister in Lytton. In 1942, Marna gained a new playmate, her brother Doyle Lott. The two became avid players of hide and go seek throughout the farmhouse and enjoyed playing “house” outside on the front porch or in the corn crib. In 1947, her family moved to a farm in Pomeroy, Iowa where she finally lived with indoor plumbing and a bathtub. Marna began attending church when she was 4 years old with her uncle Gene and began attending the Methodist church by age 7. At the age of 12, she was confirmed in the Pomeroy Methodist Church. Growing up, Marna loved to swing on the old gunnysack swing her father made in the corn crib, ride her bicycle, walkon wooden stilts her father made for her, and ride her horse named, "Pet". Often times she road Pet until he laid down on the road, forcing her to walk a mile back to the house alone. For daily chores, Marna fed baby chicks, attended laying hens, and avoided the "mean old rooster" at all costs. Despite her mother forcing her to dreadfully take piano lessons at the age of 6, she later used these skills to play the accordion all throughout life. As a daddy's girl, Marna enjoyed spending time outside of the house with her father, Walter Lue Lott, by running foot races down their country road lane and having deep conversations in the barn while milking cows. Once she finished chores with her father, she enjoyed coming inside to watch her mother bake sugar cookies, pies, and most importantly, potato bread. In junior high, Marna was in every school play from 8th grade through high school and began playing 6 on 6 basketball in 7th grade. In 8th grade, she began practicing with the high schoolers and in 9th through 12th grade, she was a starter for varsity. On Saturday nights, she would go into town with her best friend Sue to watch the band and see what the boys were up to. Marna would sometimes ride "Pet" to town, picking up Sue on the way there. Marna and her two best friends, Sue and Nancy, would frequently go ice skating and swimming at their cottages at the Twin Lakes in IA. In high school, Marna was sang in the Girls Glee club, was in Future Homemakers of America. In 1958, Marna graduated from Pomeroy with a class of 29. On September 7th, 1958, Marna was united in marriage with Darrell Weisenborn and bore their first child, Michael Duane Weisenborn in 1960. In 1964, she welcomed her second child, Renae Ann Farnsworth, to the world. During the early years of motherhood, Marna enjoyed baking rhubarb crisp but would much rather be outside, tending her garden for flowers and vegetables, and doing yardwork. When she wasn't standing between her two children, preventing a towel-snapping fight from breaking out while washing and drying the dishes, Marna listened to 50's music and Elvis. Throughout their schooling careers, Marna attended every musical and sports event Mike and Renae had. She also enjoyed sewing quilts with her daughter Renea for Project Linus and veterans across the nation. Marna also enjoyed going to antique auctions. For over 25 years, Marna worked at Wilson Seed as a bookkeeper and secretary. In 1992, she earned Employee of the Year and retired in 2008. Marna enjoyed traveling with her late-friend, Luetta Moore and sister-in-law, Donna Lott. Some of Marna's favorite trips include Australia, Alaska, Hawaii, Novita, Prince Edward Island, Canada, Niagara Falls, and Sturgis. For over 43 years, Marna attended First Baptist Church in Harlan, IA where she loved attended Sunday School and going out for Sunday lunch with friends. She sincerely loved the Lord the friends He provided to her within the First Baptist Church Family. In 2010 she was united in marriage to David Outhouse after several years of attending Broadway plays and playing cards together. In 1991, Marna was blessed with her first grandchild, Gregory Michael and in 1992, welcomed her second grandchild, Joshua David to the world. She enjoyed going on special trips with Joshua, Luetta, and Luetta's son together. In 1999, she was blessed with her third grandchild, Jennifer Lynn, and in 2001, with her final grandchild, Jacalynn Joan. Marna loved spending time with her grandchildren and was an avid supporter by attending their football, basketball, and soccer games, wresting and swimming meets, jazz and concert band competitions, speech contests, and cheering them on as they marched with their trumpets in parades. She spoiled them by taking them to Manheim Steamrollers and plays in Omaha. Her dedication towards being the best grandmother she could be was prevalent through her separate playroom she had for them where they played monkeys in a barrel, kerplunk, Yahtzee, Phase-10, and stacked yogurt cups into towers before knocking them down. Once her grandkids where too old to have races rolling down her backyard hill and climb her trees, she hired them to mow her lawn and help do yard work (which never seemed like a chore for her). In 2018, Marna became a great-grandmother to Elliott Michael Weisenborn.

Marna Lou Lott was born on February 11, 1940, in Lytton, Iowa in her family farmhouse. As a baby, Marna was baptized in her family home by the Lutheran minister in Lytton. In 1942, Marna gained a new playmate, her brother Doyle Lott. The... View Obituary & Service Information

The family of Marna Lou Weisenborn created this Life Tributes page to make it easy to share your memories.

Send flowers to the Weisenborn family.