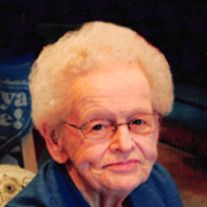 Marjorie Ann, daughter of Henry Ferdinand and Lillian Helen Dethlefs Mohr was born on October 6, 1927 in Iowa Township, Crawford County Iowa. She was raised in Manning and graduated from Manning High School in 1945. She was employed at Al Martens Ben Franklin during high school and until her marriage to John Bertin Whited on September 10, 1947. They moved to Ames where John attended ISU and Marjorie worked in the Ben Franklin in campus town. They moved to Sioux Rapids for a short time where they operated a dairy processing plant. In June of 1949 they moved to Denison where they and Marjorie’s sister, Marilyn and John’s brother, Roy opened White Star Dairy. Marjorie served as book keeper for the business until their retirement in 1983. For the next 28 years they spent winters in Weslaco, Texas. Over the years, Marjorie participated in a variety of community activities including long time member of the First United Methodist Church and United Methodist Women; the TallKorn Campers chapter of Good Sam, serving as secretary and treasurer; Crawford County Historical Society; Crawford County Hospital Auxiliary and chapters of Red Hatters in Denison and Weslaco. Marjorie was a 70 year member of the VFW and American Legion Auxiliaries. She held every office in the VFW Auxiliary, including 16 years as treasurer. She was a charter member of the VFW Past President’s Club and served as president and secretary-treasurer. While Marjorie enjoyed dancing with John, cooking, camping and exercising (she was a fixture at the local Curves), the focus of her life was visiting with family and friends. She loved to write letters, send cards, talk on the phone and meet with friends. Marjorie and John were regular participants of the after church breakfast group at Cronks, as well as several other breakfast and lunch groups. She and John hosted family dinners until they moved to Swan Place in 2017 where she resided until her death on February 25, 2020. In addition to her parents, Marjorie was preceded in death by her husband John, sister Marilyn, and brother Wade. Left to cherish her memory are her children Diana, John and wife Nancy Dunn, Marcia and husband Peter Simons, Berton and wife Maureen; grandchildren Dawn and husband Kyle Seibold, Ryan and wife Beth Holdsworth, Megan and husband Kirk Nichols , Ethan Whited and fiancee Kristen Wright, Derick Whited, Jason Whited and Kelsey Dunn; great-grandchildren Joshua, Abigail and Ava Seibold and Nolan and Nile Holdsworth; sisters Lila Schroeder and Iva Hinze; many nieces, nephews, other relatives and friends. The following quote found among her papers sums up Marjorie’s life perfectly: “I try to enjoy life to the fullest and my first pride and joy is my family.” In Lieu of flowers, memorial contributions can be made to the First United Methodist Church of Denison or Kindred Hospice.

Marjorie Ann, daughter of Henry Ferdinand and Lillian Helen Dethlefs Mohr was born on October 6, 1927 in Iowa Township, Crawford County Iowa. She was raised in Manning and graduated from Manning High School in 1945. She was employed at Al... View Obituary & Service Information

The family of Marjorie Ann Whited created this Life Tributes page to make it easy to share your memories.

Send flowers to the Whited family.