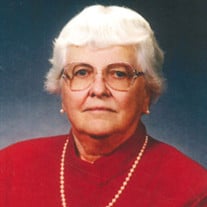 Marion Cornilsen, daughter of Tom and Margaret (Ehlers) Jannsen, was born October 24, 1928 in Chicago, Illinois. She was baptized and confirmed. She attended Chicago Elementary, Grant Township Country School, Calamus School in Calamus, Iowa; and graduated from Elwood High School in Elwood, Iowa with the class of 1947. On November 11, 1951, Marion was united in marriage to Howard Cornilsen at St. John’s Lutheran Church in Preston, Iowa. Together they raised two daughters: Linda and Diane. Marion loved helping Howard on the farm and was very passionate with the livestock. Following Howard's death in 1979, she eventually moved to Maquoketa, and later on to Harlan, with a two year stint in the Dallas area. In 2013 she decided on her own to move to the Salem Lutheran Home in Elk Horn. She was a member of St. John’s Lutheran Church in Grand Mound; Joy Lutheran Church in Rockwall, Texas; and Immanuel Lutheran Church in Harlan, Iowa. Marion loved polka music and her go to treat was a piece of chocolate, she also took interest in American Indian History. She had a post card collection of over 22,000 cards that she added to from traveling the United States and parts of the World. She also loved time spent with her family and friends, playing a game while visiting. She looked forward to getting mail, especially from her many pen pals. Marion died on Monday, March 9, 2020 at Salem Lutheran Home in Elk Horn, Iowa, attaining the age of ninety-one years, four months, and fourteen days. In addition to her parents, she was preceded in death by her husband Howard and brother Martin. She is survived by her children Linda (Larry) Hopp of Harlan, Iowa; Diane (Larry) Magruder of Southern Pines, North Carolina; grandchildren Bryce (Kelly) Hopp of Harlan; David (Misty) Hopp of Colorado Springs, Colorado; Tom (Kandi) Hopp of Corpus Christi, Texas; Linnea (Brad) Ekin of Seattle, Washington; Robert Magruder of Dallas, Texas; Christian (Katelyn) Magruder of Wichita Falls, Texas; great grandchildren Shea, Carlos, Henry Hopp; Elise Hopp; Austin and Vivian Hopp; other family members and friends.

The family of Marion Cornilsen created this Life Tributes page to make it easy to share your memories.

Send flowers to the Cornilsen family.