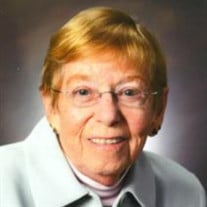 Marilyn Eleanor Wittrup was born in Harlan, Iowa on Sunday, February 23, 1930, the daughter and first child of Gordon and Agnes (Jorgensen) Sorenson. She attended what was then Laurel School and Harlan High School, from which she graduated in 1948. Marilyn was an accomplished musician from an early age, taking advantage of the need to practice during dish washing time. She studied piano and organ and at age 13 became the regular organist at Bethel Baptist Church in Harlan. During her high school years she was a favored accompanist for vocalists and pianist for musical and other events, including Gilbert and Sullivan operettas. She was also the regular organist at Pauley Funeral Home which allowed her to skip Phys Ed, which she detested. On June 7, 1949 she married Richard Wittrup. After a brief stint in Council Bluffs they moved with their infant firstborn and their house trailer to Columbia, Missouri where Richard finished his undergraduate work. From there they took up residence in Chicago where Richard undertook graduate studies. Marilyn shortly became organist at Woodlawn Baptist Church, a position she held during the rest of their stay in that city. In 1957 they moved to Lexington, Kentucky where Marilyn, by then the mother of two, became active in community work, including heading up the annual fundraising drive for a hospital founded by Easter Seals for crippled children, especially polio victims, a service that resulted in her being made a Kentucky Colonel by the Governor. One year she also directed the summer bible school at Calvary Baptist Church with an enrollment of more than a hundred children. 1968 found them in the Boston area where she, now the mother of three, was active in First Baptist Church. She also organized and then managed Traveling Meals in Newton, MA, a five day per week program for seniors. Always interested in adventure, she in 1977 accompanied Richard who had accepted employment in Jeddah, Saudi Arabia. There she adapted to the restrictions on women by giving piano lessons, serving as rehearsal and performance pianist for the Jeddah Light Opera Company, an expatriate group that performed twice each year, and buying the oriental carpets that continue to decorate her floors. During that time they acquired an apartment in St. Cergue, Switzerland to which she frequently retreated as a respite from the stringent living conditions in Saudi Arabia and where she could attend the American church (Emmanuel Episcopal) in nearby Geneva. 1988 found them back in the US. Richard took a job in Detroit and Marilyn commuted back and forth from their apartment there and the home they continued to maintain in Scituate, MA, a suburb of Boston. Richard's work took him to Houston TX in 1998 for three years and he finally retired in 2001 when they moved back permanently to their Massachusetts home. Their retirement was characterized by extensive travel, the high point of which was a 12 day train trip across Siberia. They had owned a small dwelling in their home town of Harlan for many years, using it as a place to stay during their frequent visits. Seeing it as an ideal retirement site, they had long planned to take up permanent residence there "when they got old". In 2018 they finally did so. She died in that home on June 26, 2020 peacefully and with family present. Marilyn's circle of friends was wide and varied. Numerous people around the world think of her as mother or grandmother. For them she provided a source of sanity and stability in a turbulent world. Her 90th birthday party was attended by three Episcopal priests. There are photos of her with the Queen of Jordan, the Archbishop of Canterbury, the Governor of Iowa and the Presiding Bishop of the US Episcopal Church. Though her formal education ended with high school, she early on became counselor and wise mentor to M.D.s and Ph.D.s. She was a dedicated and attentive mother who persisted in loving her children while they grew up in their own ways. She was also a loving and helpful wife, a talented and active musician, a skilled homemaker proud of that role, and an eternal optimist. She is survived by her husband Richard Wittrup; children Kenton (Sandra) Wittrup of Lynn MA, Alan (Shannon Keith) Wittrup of Scituate, MA, Eleanor (Steve Sochacki) Wittrup of Valley Springs CA, Katrina (Nigel) Taylor of Sancreed, Cornwall England and Steve (Jennifer Logan) Borst of Salt Lake City, UT; five grandchildren and sister Kathryn Kuper of Sioux Falls SD.

Marilyn Eleanor Wittrup was born in Harlan, Iowa on Sunday, February 23, 1930, the daughter and first child of Gordon and Agnes (Jorgensen) Sorenson. She attended what was then Laurel School and Harlan High School, from which she graduated... View Obituary & Service Information

The family of Marilyn Eleanor Wittrup created this Life Tributes page to make it easy to share your memories.

Send flowers to the Wittrup family.