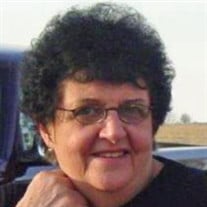 Marilyn Joann Gray (Pie), daughter of Dan and Jesse Petersen, was born Dec. 15 1932 in Poplar. She had two sisters, Verda and Flossie, and one brother, Ronald. She attended Jacksonville School #1. She married and had three children, Doug, Don, and Donita. They resided in Harlan and Marilyn worked at the Chicken Hut. On May 15, 1963 she married Neil Douglas Gray and had two daughters, Carman and Julie. Marilynn milked cows for many years and took care of the farm. She helped Doug haul cattle and tended to the other livestock. She had a passion for livestock and was a good caretaker. Years later they decided to move to Kimballton where they stayed for their final years. Marilyn enjoyed talking about cattle and going to the lake for either just a drive or to catch some fish. Marilynn also had one heck of a shot, shooting three pheasants with one bullet while hunting one day. She also enjoyed going to the sale barn and catching a good football game on TV when Larry King Live wasn't on. Marilynn loved bargin shopping in Walmart and the grocery store. She loved to clean and loved the color black; hair, wardrobe, and all. She was a wonderful cook who passed on her skills to her children , even the men. Her one of a kind laugh will be missed, along with her table top toothpick smile conversations. She will be remembered for doing things her way, running a tight ship, and being sharp as a tack. Marilyn is preceded in death by her parents and sisters, her husband Doug of 49 years, her son Doug, her daughters Donita and Julie, and her grandchild Jessie Bowlin. She is survived by her brother Ronald (Adrianne) Petersen of Elk Horn, IA; son Don (Kim) Jensen of Galva, IA; daughter Carman (Justin) Grove of Holstein, IA; grandchildren Christiana (Brian) Bowlin of Kimballton, IA; Elizabeth (Allan) Schmidt of Holstein, IA; Josh (Jess) Jensen of Galva, IA; Kourtnee (Richy) Swanger of Battle Creek, IA; Joe Nelsen Jodie Wood, Jolene Wesley, and Jerry Nelsen; Katie (Jeremy) Petersen of Elk Horn, IA; Matthew Arkfeld and fiancé McKenzie Jendro of O, MN; and Collin Grove of Holstein, IA; great grandchildren Alex Hansen; Danielle, Jada, Ty Bowlin; Preston, Grant, Addison Schmidt; Kellen and Karson Jensen; Wesley, Daltyn, Luke, Levi, Alayna Swanger; Jace, Jaelynn, Jacob, Jorgen, and Jared Petersen. A celebration of life will be scheduled at a later date due to restrains on gatherings.

Marilyn Joann Gray (Pie), daughter of Dan and Jesse Petersen, was born Dec. 15 1932 in Poplar. She had two sisters, Verda and Flossie, and one brother, Ronald. She attended Jacksonville School #1. She married and had three children, Doug,... View Obituary & Service Information

The family of Marilyn Gray created this Life Tributes page to make it easy to share your memories.

Send flowers to the Gray family.