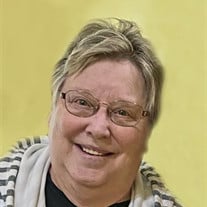 Marilyn Jane Evans, daughter of Red and Nina (Camenisch) Meredith, was born on November 16, 1946 in Council Bluffs, Iowa. She was baptized and confirmed at the United Methodist Church in Shelby. She grew up in Shelby and graduated from Shelby-Tennant High School with the Class of 1965. After high school, she attended the Jennie Edmundson School of Nursing and graduated in 1968 as a Registered Nurse. She married Frank Evans on December 2, 1967 at the First Christian Church in Council Bluffs, Iowa. Three children were born to this union: Andy, Allison and Joel. They made their home in Shelby, and she was actively engaged in the farming operation while the kids were growing up. Marilyn was a dedicated nurse who cared deeply about her patients. She worked multiple specialties throughout her career including internal medicine, dermatology, and dialysis. She ended her career as a certified organ transplant professional. Her compassion for others was undeniable. She retired in 2011 after a very fulfilling career. Marilyn enjoyed quilting and traveling on bus tours around the United States. Reading brought her much enjoyment. She always looked forward to spending time at her lake house in Okoboji. Sunday meetings at the Hursey house were her weekly social function and brought her many laughs. She adored her family and loved attending her grandchildren's activities. She died at home on Friday, July 30, 2021, having attained the age of seventy four years, eight months and fourteen days. She was preceded in death by her parents, husband Frank and son-in-law Rich Maassen. She is survived by her three children Andy Evans of Dunlap, Iowa; Allison Maassen of Neola, Iowa and Joel Evans and his wife Jamie of Shelby; five grandchildren: Alyssa Engle, Wyatt Evans, Zane Evans, Olivia Maassen and Meredith Maassen; one brother, Mick Meredith of Omaha; nieces and nephews, other relatives and friends.

Marilyn Jane Evans, daughter of Red and Nina (Camenisch) Meredith, was born on November 16, 1946 in Council Bluffs, Iowa. She was baptized and confirmed at the United Methodist Church in Shelby. She grew up in Shelby and graduated from Shelby-Tennant... View Obituary & Service Information

The family of Marilyn Jane Evans created this Life Tributes page to make it easy to share your memories.

Send flowers to the Evans family.