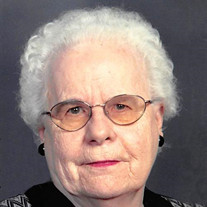 *Social Distancing standards will be observed during both the visitation and the service.* *Live Stream will be available On Thursday for the service on the homepage at www.pauleyjones.com.* Marie Katherine Wordekemper, daughter of Bernhard and Emma (Hollander) Petersen, was born August 25, 1932 south of Denison, Iowa. She attended and was confirmed at St. Rose of Lima Catholic Church in Denison. She attended grade school at East Boyer #9 country school and graduated from Denison in 1950. After she graduated she was a waitress for a few years at a hotel restaurant in Denison. She also worked as a house keeper at the hotel before she got married. She was united in holy matrimony to Lawrence Wordekemper on January 20, 1959. They were married at St. Rose of Lima Catholic Church. Marie and Lawrence were blessed with two sons, Dean and David Wordekemper. When her children were born, she devoted herself to being a stay at home wife and mother. They had a dairy farm that they not only raised a family on, but chickens as well as cows. She enjoyed doing volunteer work, being a part of the ladies club every month and playing card games and Bunco. She enjoyed spending time and playing with her grandchildren. She also always had the coffee pot going and a pan of bars for anyone who stopped over to get eggs. Marie passed away late in the evening on Sunday, July 26, 2020 at Regency Park Nursing & Rehabilitation Center of Carroll in Carroll, Iowa. Marie attained the age of eighty-seven years, eleven months, and one day. Along with her parents, she was preceded in death by her husband Lawrence, her infant son David, her sister Ruth and husband Merlin Maack, as well as her sister Lucile and husband Earl Foster. Marie is survived by her son Dean Wordekemper of Carroll, IA; grandchildren Jacob (Haley) Wordekemper of Larchwood, IA; Caitlin Wordekemper of West Des Moines, IA; Hannah Wordekemper of Nashville, TN; Megan Wordekemper of Carroll, IA; great-grandchildren Noah, Amelia, Delaney, Emma, Randi, and Jessa; brother Bernhard (Marilyn) Petersen of Schleswig, IA; former daughter-in-law Lisa Wordekemper of Arcadia, IA; and many nieces, nephews, family members and friends.

*Social Distancing standards will be observed during both the visitation and the service.* *Live Stream will be available On Thursday for the service on the homepage at www.pauleyjones.com.* Marie Katherine Wordekemper, daughter of Bernhard... View Obituary & Service Information

The family of Marie Wordekemper created this Life Tributes page to make it easy to share your memories.

*Social Distancing standards will be observed during both the...

Send flowers to the Wordekemper family.