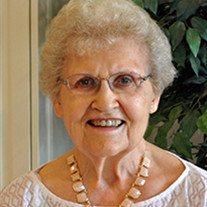 Marie Arentson passed away on February 12th, 2022 at the Elm Crest Retirement Community in Harlan, Iowa. Marie Emma Steenbock Arentson and her twin sister Eunice were born to Henry and Meta Ehlers Steenbock on August 8th, 1929 on a farm near Persia, Iowa. She was baptized and confirmed at the Trinity Lutheran Church in Persia. Marie attended school in Persia, graduating with the class of 1946. She attended Valparaiso University, then moved to Omaha, NE where she worked as a secretary. She and her sister joined the Omaha Twin Club and it was there that she met Verl. They were married January 30th, 1954. They rented farms near Persia and Harlan, and in the spring of 1965, bought a farm near Harlan. Marie was baptized at Bethel Baptist Church in Harlan after she and Verl were married. Marie and Verl had five children: Connie, Lois, Larry, Emory, and James. After moving to Harlan, they became members at First Baptist Church. Marie was involved in the Ruth Circle and enjoyed putting together supplies to help overseas missionaries. She was a member of the Lincoln Social Club and Shelby County Porkettes. She was a 4-H Leader and served on the Family Living Committee for the Shelby County Extension Service. She was a member of the Shelby County Historical Society and helped arrange many exhibits there. Marie worked for the Lowell Holmes Insurance Agency for several years. In 1985, Marie and Verl retired from farming and moved into Harlan. Marie worked for the CDS company for 10 years until she retired. In October of 2018, Marie and Verl sold their home in Harlan and moved to the Elm Crest Independent Retirement Community. Marie and Verl enjoyed traveling and visited all 50 states. They took great pride in their children and grandchildren. They enjoyed visiting with each one, attending their weddings and their special events. Marie was first and foremost a devoted wife, mother, grandmother, and great grandmother. She was committed to God and her family and loved them all unconditionally. She was a faithful homemaker and always made sure there were plenty of baked goods (and red jello) for the children and grandchildren when they came to visit. She is survived by children Connie (David) Stilley of Clive, IA; Lois (Dallas) McDermott of Johnston, IA; Larry (Pam) Arentson of Redwood Falls, MN; and Emory (Shellie) Arentson of Boone, IA. Brother-in-law and sister-in-law Gene and Darlene Arentson of Harlan; sister-in-law Mary Nichols Olson of Marshalltown, IA; brother-in-law Stanley Christensen of Harlan; sister-in- law Vivienne Steenbock of North Bend, Oregon; 18 grandchildren: Cara (Scott) Blum, Joshua (Julie) Stilley; Jordan (Shawna) Stilley, Luke (fiance’ Nichole) Stilley, Erin (Jason) Gaul, Ryan McDermott, Matt (Katie) McDermott, Wesley (Sarah) Arentson, Brandon (Heather) Arentson, Jared Arentson, Hannah (Scott) Kratzer, Megan (Zach) Sloter, Titus (Carolyn) Arentson, Esther (Caleb) McKim, James (Alicia) Arentson, Silas (fiance’ Maryn) Arentson, Mary Arentson, Ezra Arentson, and 34 great grandchildren.

Marie Arentson passed away on February 12th, 2022 at the Elm Crest Retirement Community in Harlan, Iowa. Marie Emma Steenbock Arentson and her twin sister Eunice were born to Henry and Meta Ehlers Steenbock on August 8th, 1929 on a farm near... View Obituary & Service Information

The family of Marie Arentson created this Life Tributes page to make it easy to share your memories.

Send flowers to the Arentson family.