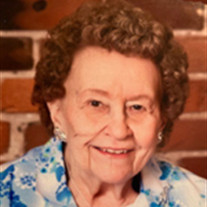 Marian Euvon (Bonnie) Peterson, the youngest child of John and Dolly (Whaley) Herkenrath, was born on April 27, 1922 in Portsmouth, Iowa. She passed peacefully, surrounded by her loved ones, on February 19, 2021 at Bergen Mercy Hospital in Omaha, NE having attained the age of 98 years young. Bonnie was baptized at St. Mary's Catholic Church in Portsmouth and attended St. Mary's Schools until her graduation in 1939. She attended Mount St. Scholastica College in Atchison, KS earning her teaching certificate. She taught in single-room schoolhouses for Shelby County Schools and also worked as a secretary in California. She married Eugene Mathew (Dane) Peterson on June 23, 1945 in Portsmouth, IA during a furlough from his World War II Naval service. Their marriage produced five children: Mary Janelle, Vance, Laurel, Jay, and Aimee. Bonnie and Dane lived in Harlan, where Janelle was born, until 1950. In the coming years, the family grew in each of the cities where they lived: Sioux Rapids, IA (Vance), St. Louis, MO (Laurel and Jay), and Harlan (Aimee). Upon their return to Harlan in 1959, Bonnie and Dane raised their children, enjoyed extended family, and started Peterson Gas (a propane fuel business). As the business grew it was relocated north of Harlan, on Highway 59, in 1970. The family business expanded to include the 59'er Steakhouse and Lounge in 1979 and the 59'er Motel in 1992. After decades of service to the surrounding communities, the family businesses were sold in 1998. Bonnie moved to Marquis Place in Elkhorn, NE in 2018 to be closer to her children. Bonnie was a long-time member of St. Michael's Catholic Church in Harlan, IA. She was an avid bowler and bridge club member into her 60's and attended women's groups each week. Bonnie was known as a competitive game and card player, never passing up the opportunity to play with family, friends, and especially her grandchildren. She loved to play the nickel slots and celebrated many birthdays at the casinos in Council Bluffs with family. Bonnie loved bargain shopping, garage sales and was extremely passionate about giraffes. With the help of her family and friends, she collected thousands of giraffes in all shapes and sizes over her lifetime. She was preceded in death by her parents; her husband Dane; three sisters: Bernice Rogers, Sadie (Charles) Spears, and Valera (Max) Gillette; her brothers: Phil (Helen) Herkenrath and Bernard (Dottie) Herkenrath; and her beloved son Jay Peterson. She is survived by her children: Janelle (Stephen) Gillespie of Omaha, NE; Vance Peterson of Harlan, IA; Laurel (Doug) DeWees of Maricopa, AZ; and Aimee (Bruce) Niendorf of Oshkosh, WI; 9 grandchildren, 1 great-granddaughter, a step great-grandson, her in-laws Ben and Joan Peterson of Ormond Beach, FL; and many nieces, nephews, extended family and friends. Masks will be required for all services.

Marian Euvon (Bonnie) Peterson, the youngest child of John and Dolly (Whaley) Herkenrath, was born on April 27, 1922 in Portsmouth, Iowa. She passed peacefully, surrounded by her loved ones, on February 19, 2021 at Bergen Mercy Hospital in... View Obituary & Service Information

The family of Marian "Bonnie" Peterson created this Life Tributes page to make it easy to share your memories.

Marian Euvon (Bonnie) Peterson, the youngest child of John and...

Send flowers to the Peterson family.