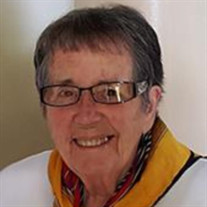 Marian Gene Johnson, daughter of Ferris and Tressie (Ward) Keown was born November 12, 1925 in Gilman City, Missouri. She attended high school in Gilman City where she graduated. She then attended Northwest Missouri State where she finished 3 years of education to be a dietitian and was President of her sorority. During the time of WWII, she worked at North American Airlines, being the first female hired as a drafter in the engineering department. She also taught for a year at a one room school. On June 13, 1948, Gene was united in marriage to Harold Emil “Swede” Johnson in Gilman, Missouri. She worked as a receptionist/bookkeeper for Dr. Joseph Spearings Office in Harlan. Gene was a member of the United Methodist Church in Harlan were she was active with the women’s circle. She was also a member of the Eastern Star, PEO, and the Harlan Golf and Country Club. Gene and Swede played in couples bridge groups and she was active in several bridge groups which she loved. Gene enjoyed cooking for family and friends, there was always a place at her table for visiting coaches, refs, and friends of her daughters. She was involved in all of her girls activities. She also helped as a “Mom” to many of “Swede’s Boys” he coached in football. She always enjoyed following Harlan Sports, Iowa State Cyclone and Iowa Hawkeye Sports. She loved Christmas and Fourth of July Celebrations. Gene died on Friday, November 5, 2021 at Elm Crest Retirement Home in Harlan, Iowa, attaining the age of ninety-five years, eleven months, and twenty-four days. In addition to her parents, she was preceded in death by her husband Harold “Swede” Johnson, sister Delores Harper. She is survived by her daughters Becky (Eldon) Rike of Corning, Iowa; Amy Brown of Delafield, Wisconsin; grandchildren Lisa (Rob) Gray of Ankeny, Iowa; Katie (Jeff) Scandrett of Norwalk, Iowa; Dan Rike of Corning, Iowa; Chris (Tricia) Brown of Madison, Wisconsin; Aly Brown of Hartford, Tennesee; great-grandchildren Stephanie Gray, Derek Gray, Kara Scandrett, and Khloe Scandrett; brother-in-law Dr. Bill Harper of Hugoton, Kansas; 8 nieces and nephews; other family members and friends. In lieu of flowers family suggests memorials be made to the Harlan Community Booster Club.

Marian Gene Johnson, daughter of Ferris and Tressie (Ward) Keown was born November 12, 1925 in Gilman City, Missouri. She attended high school in Gilman City where she graduated. She then attended Northwest Missouri State where she finished... View Obituary & Service Information

The family of Marian Gene Johnson created this Life Tributes page to make it easy to share your memories.

Send flowers to the Johnson family.